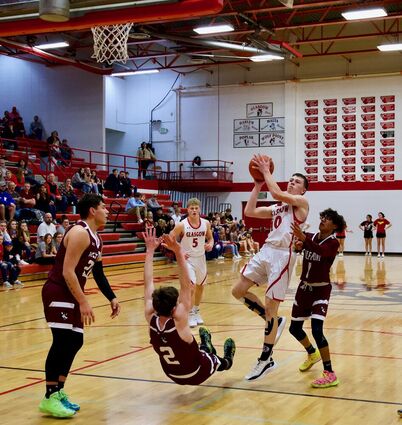 Glasgow's Riley Smith pays no mind to the Wolf Point defense in the Scotties' 66-51 win over the Wolves Jan. 28 in Glasgow.

The Scottie boys basketball team started their weekend with a heartbreaker of a loss to the Mustangs in Malta Thursday when the home team drained a 30-foot buzzer beater to win 44-43. But Glasgow rebounded with strong wins over Wolf Point, 66-51, at home on Friday and over the North Country Mavericks, 45-29, in Saco on Saturday.

Glasgow's game against rival Malta was a back-and-forth affair with the lead trading hands over the course of the game. Malta led 13-11 at the end of the first but Glasgow held them to a single free throw in the second to carry a 20-14 lead into halftime.

The Mustangs owned the third quarter, putting up 17 points to the Scotties' 7 for a 31-27 lead heading into the final eight minutes. Glasgow outscored Malta 16-13 in the fourth but the Mustangs scored when it was most needed for the win.

Glasgow had nine fouls with only two of those coming in the second half. Malta was called for 14 infractions.

Dalton Sand and Keigan Ingram were each called for three fouls. Bergen Miller was called for two and Riley Smith had one foul.

Glasgow went 10-for-14 at the free throw line, led by Smith who went 5-for-6 and Ingram who was 3-for-4 at the charity stripe. Smith scored 12 points while Ingram added 9. KJ Ingram scored 11, including a three-pointer. Wyatt Babb added 8 and Miller hit a shot from downtown for the Scotties.

The Scotties crashed the boards, pulling down 38 rebounds. Keigan Ingram led the team with nine, followed by Babb with eight and Sand with seven. Smith and KJ Ingram snagged six each and Miller grabbed two.

Smith led in steals with four while KJ Ingram and Babb had one takeaway each. Babb had two blocks and Keigan Ingram one. Miller had two of the team's four assists. KJ Ingram and Sand added one a piece.

Vaughn Miller led the squad with 14 points. Toryn Richards and Myles Yoakam added 12 each. Aiden Hoerster scored 7, Jordan Cook 5, Ashton Potter 4, Connor Hudyma 2 and Nic Solorzano 1 point. Glasgow's C squad took on the Mustangs Jan. 24 in a Monday night matchup, their only game of the week. The Scotties earned a 46-27 victory on the road after leading in all four quarters.

Coy Nelson led the team with 12 points, including a trey, followed by Noah Runner with 10 points and Noah Leckie with 9. Rex Monson connected for 5 and Carter Hoerster scored 4 points. Kyler Holinde, Dylan Plummer and Ty Westby each added a field goal.

Shrugging off the loss, Glasgow hit the home hardwood Friday night against the Wolves on Super Hero Night and proved that not all heroes wear capes while avenging an earlier season loss, winning 66-51.

Miller led the Scotties with 18 points, hitting two shots from downtown and hitting 8-for-9 on free throws. Babb also hit two from the outside and went 4-for-6 at the stripe for 16 points. Keigan Ingram went 3-for-4 on bonus shots and added 11 total points while Smith also had 11 points hitting 9-for-10 from the free throw line.. KJ Ingram and Sand added 5 each, both with a trey.

As a team Glasgow shot 77.4 percent on free throws and 54.5 from the field, going 6-for-12 from outside. They had eight assists, led by Babb with three. Miller and Keigan Ingram had two each and Smith one.

Babb led in assists with three followed by Miller and Keigan Ingram with two each. Smith also had a dish.

Keigan Ingram grabbed 14 of Glasgow's 24 rebounds. Miller, Smith and Sand snagged five a piece and Babb grabbed three boards. Babb had four steals while Miller and Sand had two each with Keigan Ingram and KJ Ingram had one a piece. Babb and Keigan Ingram both had a blocked shot.

Smith was called for four infractions while Sand, Babb and KJ Ingram drew an official's whistle three times each. Keigan Ingram had one foul.

Richards scored 10 to lead the Scotties followed by Miller with 8 and A. Hoerster and Potter with 6 each. Cook added 5, Yoakam 4 and Nate Hentges 2 points.

Glasgow was in Saco Saturday night for a non-conference match-up against the North Country Mavericks. A tight first half saw the Scotties leading 11-10 after one and 21-19 at the half.

The Scotties outscored the Mavericks 13-6 in the third to carry a 34-25 lead into the final eight minutes. Glasgow held North Country to 4 points in the fourth while adding 11 to the the visitors' side of the scoreboard.

Glasgow was called for 19 fouls, 10 in the second half. KJ Ingram fouled out of the game. Keigan Ingram, Sand and Smith were called for three fouls each. Babb and Potter had two infractions each and Miller was called for one.

North Country held their infractions to nine, allowing Glasgow only four free throws, where they hit 75 percent. Smith was 2-for-2 and Babb 1-for-1 at the line.

Babb led the Scotties with 17 points followed by Keigan Ingram with 12. Sand connected for 6 and Smith for 4 points. Miller, who led the team the previous night, left the game before the half with an injury, but is expected back by the end of the week.

Babb also led in assists with three with Keigan Ingram and Miller added one each.

Miller, before leaving the game, had three steals. Smith and Sand had two each and Keigan Ingram and KJ Ingram both had a single takeaway.

Smith dominated in rebounds, pulling down 13 of the team's 32. Sand had six, Kegian Ingram five, KJ Ingram three, Miller two and Babb, Potter and A. Hoerster one each.

The JV game was canceled due to North Country missing one of their 10 total players. 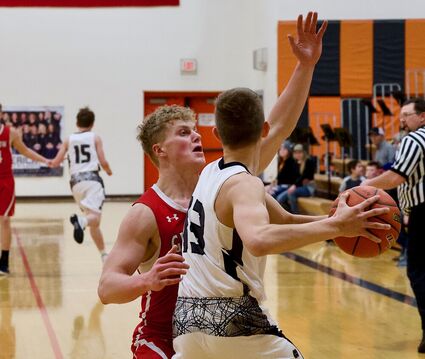 Saturday, Feb. 5, Glasgow hosts the Scobey Spartans. Senior night will be observed for band, cheer and basketball. The boys C squad game is scheduled for 1 p.m., followed by JV girls at 2:30 p.m. Boys JV will play at 4 p.m. The girls varsity game is scheduled for 5:30 p.m. Senior Night honors will be observed after the girls game, prior to the boys varsity game at 7 p.m.