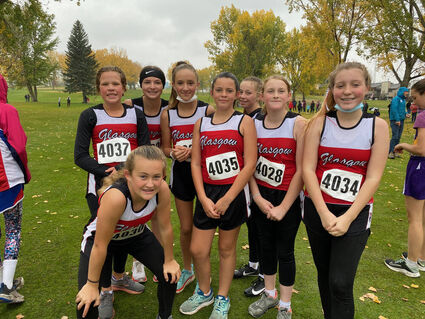 The Scottie girls totaled 36 team points to finish ahead of host Sidney and complete teams from Wolf Point, Glendive, and Frontier School. Runners on the 3-kilometer (1.8-mile) course represented 15 schools in all. Glasgow was paced by 8th grader Kimber Dulaney, who has led the team in each of the season's seven races. She finished second with a time of 12:53. Seventh-grader Haleigh Huntsman took 8th place in 14:08, and 8th grader Josie Kemp took 10th place in 14:10. Glasgow's other scorers were 8th grader Caylen Jankowski, who took 18th place in 15:00, followed closely by 7th grader Jensina Tweten, 20th place in 15:01.

Races took place on the Sidney Country Club golf course, which features a half-mile-long hill at the start. The weather deteriorated as the Scotties started racing, and most runners were drenched by the end. GMS coach Andrew McKean was impressed with the Scotties' response to the longer-than-normal course, conditions, and challenging terrain.

"We've been training all season for just such a day," says McKean, "one that really pushes our kids beyond their comfort level. They responded remarkably well." 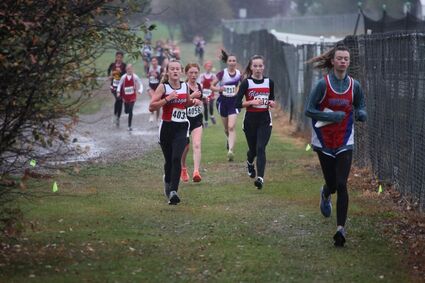 Haleigh Huntsman and Josie Kemp fight for places in the lead pack at the Siney Invitational cross country meet.

McKean singled out Dulaney for her tenacity, but noted that both Haleigh Huntsman and Josie Kemp pushed the lead pack and were responsible for the team victory, along with fellow scorers Caylen Jankowski and Jensina Tweten for top places. On the boys side, Garrett Thompson and Rowen Kloker pushed the hilly conditions for excellent times and places.

The Glasgow Middle School football teams concluded their 2021 season this past weekend in Havre. The seventh-grade team earned a shutout, 52-0 and the eighth-grade team won by a score of 20-14. The wins topped a perfect season for both teams, as both the seventh and eighth graders went undefeated this year.