By A.J. ETHERINGTON
THE COURIER 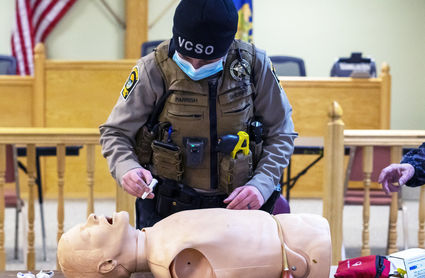 There have been over 700 opioid overdose fatalities in Montana since 2000. Many of those deaths were not the result of illicit drugs, but rather due to the use of prescription drugs for pain. In response, the state has sought to field overdose-reversing drugs and put them in the hands of EMTs, law enforcement and care providers to prevent those deaths.

One way Valley County is doing this is through a grant administered by the Valley County Care Coalition that funds training and prescriptions for local law enforcement to carry the overdose reversing medication called Naloxone. Last week they received a refresher course in the drug's administration and learned the signs of an opioid overdose in the hopes that Naloxone's presence on the streets will continue to save lives in Valley County.

"It's already in use," said Frances Mahon Deaconess Hospital's Director of Emergency Services Connie Wethern. "One [officer] has used it three times."

Wethern was on hand to instruct the officers in the drug's use and to educate them on the key signs of an overdose such as extreme pupil dilation, slowed breathing and loss of consciousness.

A consequence of opioid use for pain management is it also blocks the oxygen receptors in the brain causing euphoria-the high experienced by some users-but it also depresses breathing and can cause patients to stop breathing all together. When that happens, a person is overdosing. Naloxone works by wiping out the opioids that are blocking the oxygen receptors almost immediately.

Wethern also told the officers that often times spotting an overdose victim may be difficult but that any suspected case should receive the Naloxone as it has no harmful side effects and will instantly reverse the dangerous effects of an overdose for a short period of time. The short timeframe allows the patient to receive a higher level of care and which also saves lives.

Naloxone is administered most commonly through a nasal spray or atomizer that is shot into the nasal passages and absorbed directly into the brain-meaning it works even when a patient has already stopped breathing. EMTs and emergency rooms can use other forms of administering the drug such as through injection. A high-end version of the drug comes complete with a fully automated recording that walks the user through the drug's use in the event of an overdose.

The cops and deputies had to settle for nasal spray, and the guidance of Wethern. She cautioned the only danger from the drug's use is the sometimes violent reaction from patients waking up after receiving the drug as it forces them into immediate opioid withdrawal which can be excruciating to users of morphine, oxycontin and Vicodin. Those suffering from withdrawal can lash out violently and, Wethern explained, for that reason they were unable to carry the drug for years as EMTs. Now it is common practice to use Naloxone in cases of overdose regardless of the potential backlash.

Still, she says, "It is important to know that when they wake up, they are not happy with you."

The Valley County Care Coalition is a partnership between the county health department, local law enforcement, Eastern Montana Mental Health and Frances Mahon Deaconess Hospital. The training was coordinated by Valley Care Coalitions AmeriCorps volunteers Emmaline Keesee, of Virginia, and Sarah Schmidt, of Minnesota. AmeriCorps is a federal service program that places participants with organizations across the country that request help.

On the issue of cops carrying Naloxone, Wethern said, "I think it's good that they [law enforcement] can use this to save lives." She also stressed that most of the cases where Naloxone is used locally are not illicit drug users, but rather chronic pain sufferers. "When you have people on four opioids-morphine, fentanyl, tram or oxy-when you do that, it's because the doctors can't control the pain." She added, those are the cases that lead to overdose, and that is why having Naloxone on the streets is so important.