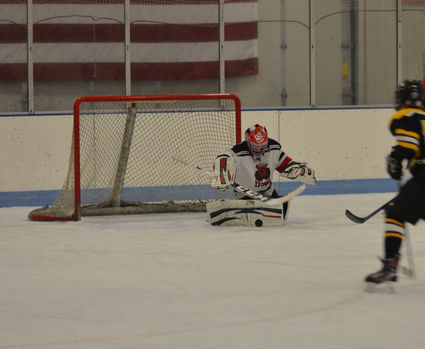 Glasgow Ice Dawgs netminder Kolten Hansen makes a pad save against the Billings Bulls during the Bantams win Dec. 7.

Lucky number seven was working hard for the Glasgow Ice Dawgs Bantam team this past weekend at the Valley Event Center. The home team notched two victories over the Billings Bulls, scoring seven goals in each of their decisive wins.

The Dawgs took to the ice Dec. 7 at 6 p.m. ready to defend their home turf. Tatum Hansen kicked off the scoring for Glasgow in the first period with an assist from Trevor Dulaney, converting on one of the 16 shots the Dawgs put on net. Glasgow goalie Kolten Hansen turned away four shots on goal as his team dominated the period.

Billings tied it up in the second when Brady Kittelman snuck one past K. Hansen, assisted by Owen Bunn. The Dawgs regained control of the scoreboard on a goal from Mason Hunter with T. Hansen getting credit for the assist. The insurance goal came when T. Hansen, assist Lexten Fairclough, scored while short-handed on an Aiden Price elbowing penalty.

The third period was all Glasgow as the Dawgs put four more pucks behind the Bull's Alexander Beam. Peyton Smith found the back of the net first with 10:18 left to play. Dulaney added two more at 6:46, assisted by Joshua Llewellyn, and 5:09 with Zevin Kummerfeldt's help. At 3:33 in the third Aiden Price brought it to seven for the Dawgs with an assist from T. Hansen, for a final score of 7 to 1.

"It was a fun game," said assistant coach Jesse Hystad.

On Sunday morning, the Bulls sought to even up the weekend, but the Dawgs were having none of it. The first period belonged to Glasgow, who rarely gave up control of the puck. The scoreboard lit up four times in the first period on the home side. Dillon Hughes and Fairclough assisted T. Hansen on his first of the game just moments into play. Fairclough added his own with help from Price and T. Hansen with 4:53 left in the first.

With Peyton Smith in the box for interference, T. Hansen notched another shorty with Dulaney with 1:16 on the clock. With under a minute to play in the period, Smith took it 4-0 with help from Hunter and Tristan Powell. Cody Simpson put the Bulls on the board, ending the first 4-1.

Glasgow again took control of the game in the second, even as puck control evened out. Fairclough, assist Koski, gave the Dawgs a four goal lead at 12:08. Kittelman notched a power play goal, assisted by Simpson when Glasgow's Smith was in the sin bin for tripping. Koski added a goal with two minutes left before intermission, assisted by T. Hansen, as the Dawgs took a 6-2 lead into the third.

The Bantams travel to Great Falls to take on the Americans Friday, Dec. 20 and Saturday, Dec. 21.