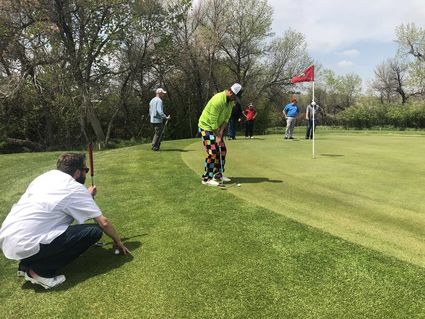 Despite a cool breezy start to the day, 28 two-man teams took to the fairways this Memorial Day at Sunnyside Country Club to compete for cash money and bragging rights. Golfers of all ages from around the region took part in the first major tournament of the season.

Divided into three flights, golfers took to a modified course for 27 holes of par 3 golfing. As the temperature increased, so did the competition. After a full day on the links, six teams walked away with the prize money.

In the "Z" flight, Andy Schell and "Jaw Bone" took home second place and $200, while Dylan Hughes and Dom Keenan won $400 for first place. In the "Y" flight Trent Holstein and Troy Holstein claimed second place and $200 while Rusty Williams and Jake Hughes claimed the top spot and the accompanying $400. Ed and Shelley Hopfauf scored low enough to take second place in the "X" flight and $200. Sue Peterson and Katie Peterson were the big winners in the "X" Flight taking home $400.