Gear Up for Homecoming 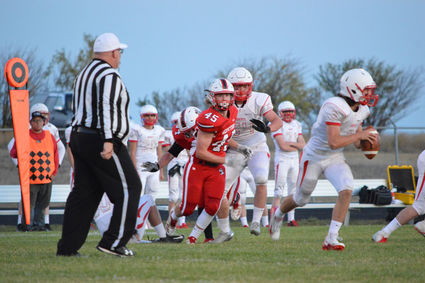 Tel Aune zeros in on Conrad's quarterback during the Sept. 21 game held at Scottie Field. Aune contributed to Glasgow's 20-14 win over the Cowboys with two consecutive touchdowns late in the game.

The Glasgow Scotties hosted the 0-3 Conrad Cowboys Sept. 21, playing to a sizable hometown crowd. Those that left early missed the best part: a Scottie win in the last seconds of the contest. The game was full of twists and turns, including four interceptions and countless penalties, most of which were to Glasgow's benefit.

While the scoreboard remained dark for the first half of the game, the second half proved to be different. In the third quarter, Conrad scored back-to-back touchdowns with an extra point added for each.

Another Boland-to-Aune pass added another six points to Glasgow's tally minutes into the final quarter of the game, followed by a successful two-point conversion which knotted things up 14-14.

As the game clock wound down, and the score remained unchanged, it appeared that overtime minutes were imminent. With seconds ticking away, the Scotties had possession and set up for the final snap of the game. Boland scooped the ball off the field at the snap and and scrambled to gain sight of a receiver. Setting his sights on John McColly, he threw a scaled-down Hail Mary to the senior receiver from Hinsdale. McColly seized the 16-yard pass in the end zone to score the game-winning touchdown, and the game came to an end with Glasgow over Conrad 20-14.

Although things weren't always pretty on the field, head coach Pat Barnett noted some overall improvements by the boys. "I think we had three or four offensive penalties," he pointed out. "There were what, 10 against Harlem?"

According to Barnett, they also did better at completing tackles. "We worked on a few drills last week," he explained. "So that helped."

When asked about the upcoming game against Cut Bank, Barnett declined to make any assumptions. "You never know what they will bring to the game," he explained. "Other than maybe adding a few plays, we're not going to change what we are doing."

Kickoff for the Scottie Homecoming game scheduled for Friday, Sept. 28, is set for 7 p.m.