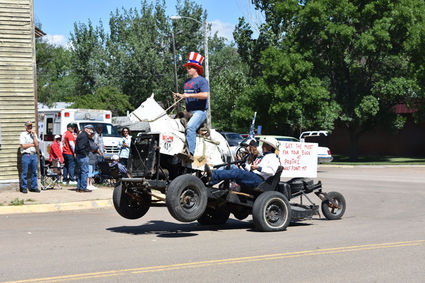 Brandon Bigelbach / For the Courier

One of the most popular floats of the Milk River Days parade was from Pro Tire in Wolf Point.

Families, couples, individuals and children armed with bags to fill with treats, filed up and down Montana Street in downtown Hinsdale during Milk River Days on July 4.

The parade kicked off with American Legion service members Jim Tollefson, Bill Thayer, Justin Strommen and Chris Strommen walking down the street carrying flags and Cody Donniaquo singing the National Anthem. Cars from the Flatland Cruisers Car Club cruised down the street, throwing treats out of windows for children to run after and place in their bags.

Floats ranged from those vying for Valley County Public Office, including county commissioner, clerk and recorder and justice of the peace, Malta Shriners Club, the Hinsdale FFA, Pro Tire from Wolf Point, C&B Operations and even the local fire department and ambulance drove down, blaring emergency sirens at the excitement of children in attendance.

After the parade was completed with emergency sirens and all, attendees were treated to a community barbeque served by the Hinsdale community. Following the barbeque, ping pong balls were shot in the air from various businesses on Montana Street, allowing adults and children to win prizes including a cooler, gift certificates and even cash. A waterslide from Salsbery Brothers was also set up between the post office and First Community Bank, allowing children to cool off and have a good time. The Hinsdale Ambulance crew hosted their yearly 4th of July Pie Auction which raised funds for a Zoll 12 lead heart monitor.

According to Teresa Jones, one of the organizers of the rodeo which occurred the day before, this year's parade was a lot bigger than previous years with a total of 42 participants taking part. "This is one of the bigger parades we have ever had," added Jones.