Scotties Shine with Sweep at Districts 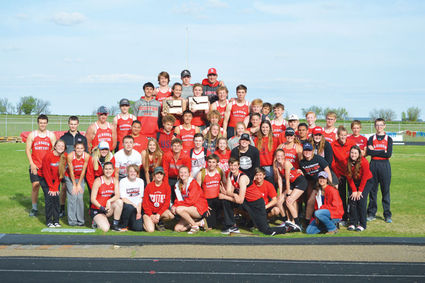 Scottie Field was full of competitors on May 12 as Glasgow hosted the dual district meet for 2B and 3C tracksters. With mild temperatures and just a slight breeze for most of the day, it was a "perfect" day to compete.

The Scotties dominated the 2B meet, sweeping both team titles and winning 28 of 34 categories for the day – more than 82 percent of the events.

"It's a testament to the kids and to the coaches who got them there," said coach Tim Phillips of the number of kids that advanced to the divisional meet. He expressed disappointment that some of the kids just missed moving on, however. "We always feel so bad for them. This year, with the extreme weather early on, really shortened our chances to work on things, especially in the throws, vault and jumps."

Highlighting some of the stand-out performances, Phillips first pointed to the boys. "Tyler (Fitzsimmons) and Garrett (Lloyd) going one-two in the 100 and 200 was solid," he explained. "They are both healthy and running well."

"Taking four of the top five spots in the 400 was big, though most times were slower than I'd hoped they would be," said Phillips.

Although he didn't place in the event, Phillips also noted that Keevan Sibley finished the 400 with a 12-second p.r., and thought it was a good way to end the season for him.

"Ellis (McKean) looked strong in all three distance races," said Phillips. "It's not that often you have a distance runner win all three at district. Alec (Boland) didn't have his best 800, but still managed second," he added.

Phillips expressed his excitement about the other three boys that raced in the 800. "We just threw them in there this week," he explained. "Two of them ended up placing, which is just nuts! Jeremiah (McCoy) was a huge surprise because he really hasn't done any competing on the track - he's mainly been vaulting. So, on three days training, he got third, with a very respectable time." Despite being hurt, Colton Pewitt also managed to place in the event.

Also competing well in the distance runs were Wilson Overby and Merlin McKean, supported by Colin Jamba and Carl Zabrocki, who both ran their personal best times to move on in the 3200.

Phillips had praise for Cody Cronmiller and his performance in the 300m hurdles. "Cody ran the best I've seen him in high school, winning the 300 hurdles. He attacked well and didn't "float" over them."

The shot put for the boys was a little discouraging, according to Phillips. "We had a couple guys who were right on the bubble, but it just didn't happen. Skyler Saiz worked a lot this off-season, but with the short season we had to throw, he just couldn't quite make that big leap. Alex Fransen was just off placing, with his best throw ever."

Winning the discus just ahead of Chevy Boos was Ben Miller. "That was awesome to go one-two there," said Phillips. "Chevy and Alec going one-two in the javelin wasn't unexpected," he added, "but to see Alec, Eli Zeluff and Bridger Barnett all set a p.r. to move on, that was fun!"

In the pole vault, Phillips is looking for the two seniors – Matt Reyling and Kyle Ross, to overcome some injuries and perform well. "They are just sitting below a breakthrough," he said. "Caden Gustafson was a nice surprise, with a p.r. to finish sixth," he added.

Moving on to discuss the girls' performances, Phillips started with senior standout Baylie Chappell. "Baylie is on fire!' exclaimed Phillips. "She set p.r.s in the 100, 200 and 400. I look for her to be a top contender in all three."

Another one to watch is junior Emily Kolstad, who has the number one time in the 400 for class B. Kolstad also easily won the 800, according to Phillips.

Keely Fossum has found her rhythm in the running events, placing in the 100, 200 and 400. Phillips also noted Sheree Cook's sixth-place finish in the 100, calling it a "nice surprise."

Lauren Padden set a p.r. in the 800 to place third. "She's really come on the last couple weeks, after battling through injury for most of the first half of the season," explained Phillips.

Brooke Westby and Ali Cunningham both placed in the 1600 and 3200s. "They didn't have their best day," said Phillips, "but I've also been working them pretty hard."

It wouldn't be an interesting meet without a runner losing some skin in a hurdle race. Junior Alaina Sallee was tripped up and left some flesh on the track during the 100 hurdles. "She still managed to dive across the line for third!" said Phillips.

He said Sallee's 300 hurdle race was a little less eventful, but she was able to set a personal best time. In the same event, junior Ellie Page finished third. "She looked pretty strong for 250 meters," explained Phillips.

In the shot put for the Scottie girls, freshman Riley Noser took the top spot. "First time in the post-season for a freshman is always tough," said Phillips, "especially in the throws. It was great to see her win!"

Natosha Sand finished second in the event with a two-foot p.r.

Noting that senior Ziggy Chamberlain came into the track season late, Phillips said she hit her p.r. In the event to advance to the divisional meet. "She picks things up very quickly," he explained. "I wish we would have had a couple more weeks with her because I think she would have placed in the javelin and discus too."

All five competitors in the discus set either a personal best or season best, according to Phillips. "Brennan Peters went over 100 for the first time, and Hannah Mickelson did her best just over 95," he said. "Regan (Zerbe) threw her season's best but it just wasn't quite enough to move on." Isabel Montoya also threw her best in the event according to Phillips.

In the girls javelin, Phillips noted that Tehya Campbell set another p.r. at 112', and Katie Kaiser snuck in for fifth place.

In the high jump, Phillips thought Kaylee King looked good despite her back issues. "Sheree Cook had another surprising performance to finish fourth," he added, "and Keely was fifth. Rachel Billingsley just missed placing, but got her season best."

In the other jumps, Phillips noted that Chappell and Cook both achieved their best marks of the year in long jump and Sallee finished second in the triple jump with her season's best mark.

In the pole vault, Phillips is looking to Kaiser to do well, with Kolstad right behind her, adding that Anika Peters jumped well to finish third, and Kenna Anderson snuck in for sixth place.

The team will be in Great Falls for the divisional meet Saturday, May 19. "I'm hoping our boys will give Fairfield a run," explained Phillips, "but they look really tough right now."

"The girls are looking pretty good," he added, "but we'll need to focus a little more this weekend to move as many as we can to state."