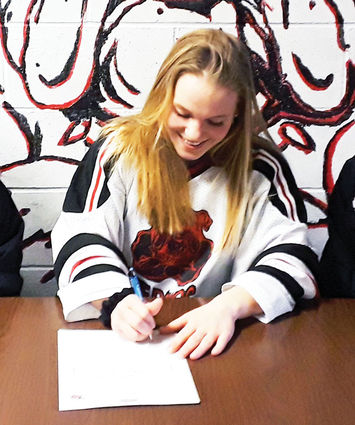 Kennedy Schmidt inks a letter of intent to play women's hockey at Minot State University. Schmidt signed the letter at the Valley Event Center on Feb 28, surrounded by family, coaches and other supporters.

According to officials at MSU, while Schmidt is the fourth recruit to commit to playing for the Beavers, she is the first American to join the team for the 2018-2019 season.

Schmidt has skated for the Glasgow Ice Dawgs for seven years. She looks forward to the challenge of pursuing her academic and career goals while continuing to play a sport she loves.