By Parker Kulczyk
The Courier 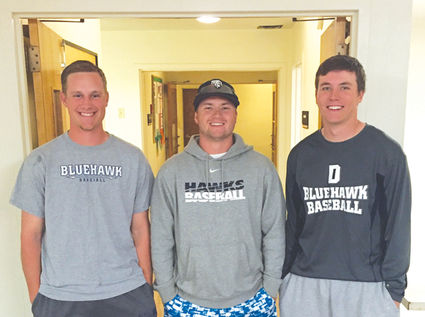 Jonathan Koessl / For The Courier

(L-R): Wacy Ortmann, Jonathan Koessl and Jason Thibault after a recent Blue Hawk practice. All three played for the Glasgow Reds in 2013, when the team placed third in the State Legion Tournament.

Former Glasgow Reds and current Dickinson State Blue Hawks Wacy Ortmann, Jonathan Koessl, and Jason Thibault have already had a very busy March with their team. From March 5 to March 18 the Blue Hawks had 16 games, all but 5 of them including an appearance from the Valley County trio.

Ortmann, a Lustre-area native and former ranging outfielder and slugger for the Reds, is a rostered outfielder for the Blue Hawks, and also pinch runs/hits. He sees sparse innings, but has a vital role providing a fresh bat, glove or set of legs off the bench.

Koessl, a two-sport standout in football and baseball for Glasgow, continues his passion for both sports. Pitching for Dickinson, Johnny has had 10 appearances this season, coming in for starter relief. He has notched one win and one save, and continues to contribute innings.

Thibault, a four-sport athlete in Glasgow had to cut that number in half when he advanced to the college level. Since transferring from MSU-Billings, Jason has logged 13.1 innings for Dickinson with an impressive 2.03 ERA. Thibault also plays the field on occasion, with an appearance at shortstop already this season (He is listed as an outfielder on their roster).

"Thibault has really stepped up on the mound this year and has given us some very good innings. He has earned a starting spot in the rotation for our conference season. Koessl has seen some innings in relief on the mound and has shown some good innings but has also been hit around a bit. He will continue to come out of the pen in relief. Ortmann has been in the pinch-hitter role this spring season and has had some success at the plate. He will continue with the role of pinch-hitter unless he earns some playing time in the outfield."

The Blue Hawks next games are scheduled Wednesday, March 23 (today) at University of Mary.