What Does Memorial Day Mean To You? 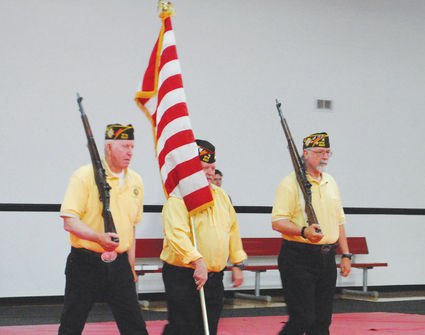 Memorial Day services were held all around the county this week. The ceremony in Glasgow that took place at the Glasgow Civic Center focused on the true meaning of Memorial Day.

But he posed a question to the crowd, "what does Memorial Day mean to you?" For Yeoman, the meaning of the day had changed over time. As a child, he thought of Memorial Day as a day for parades, a day about soldiers. As he grew older and after his time of service, the holiday meant names like Bobby Brown and others he had known were lost after giving the ultimate sacrifice.

He took the question to the crowd. Three students from the Glasgow High School band explained that Memorial Day meant recognizing sacrifice, honoring service members and inspiring others to serve their country. A veteran stood to answer the question; he choked up a bit describing those he knew who were lost during the Vietnam War.

"Their ultimate sacrifice is our freedom," Yeoman said to the crowd. "Have we fulfilled our obligation to them? Are we teaching the young people what it's all about?"

He went on that future generations need to be taught what the ultimate sacrifice for their freedom is all about. He talked about the veterans who did return home also suffer for the freedom we have today.

The ceremony ended with Taps played by Brad Persinger and Leonard Swenson. Others involved in the ceremony were the EQ Singers, the VFW Honor Guard, and the Glasgow High School Band.