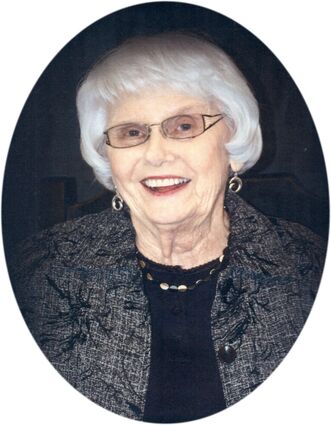 Funeral services will be held 2 p.m., Saturday, Sept. 17, at Bell Mortuary, Glasgow, with Pastor Scott Keihn officiating. Burial will be private. There will be a reception following the service at Sam and Jeff's in Glasgow.

She was born on Feb. 8, 1935, to Ingvald and Magda (Hartvikson) Leraas. Thelma's early years were spent on the farm north of Nashua, Mont., with her older sister Donna and her younger brother Gordon in the grain community. Thelma attended the Bjorklund School north of Nashua for a short time then completed her education from the Nashua school system, graduating from NHS in 1953. While in high school Thelma was a majorette for the Nashua marching band.

Wayne Waarvik and Thelma were married in August 1953. To this union four children were born: Roger, Karen, Daryl and Wayne Jr. They later divorced and she moved the family to Nashua. Thelma's welcoming home was a gathering place for her children's friends, and she was highly sought after as a chaperone for high school activities including dances and State Music Festival trips.

Thelma worked as a secretary at United Insurance and Realty until she married the boss, Marv Bjorklund, on Sept. 10, 1975. While married to Marv, winters were spent in Phoenix, Ariz., but they always returned to Montana in the summer dividing their time between Big Fork and Glasgow.

Thelma enjoyed warm weather, golfing and being a hostess to her children and grandchildren on many occasions at her Big Fork home. She was famous for her homemade buns and poppy seed muffins, making sure her grandchildren had plenty. Thelma was the epitome of a classy lady and was dearly loved by her family and all who knew her. She had a way of making those in her presence feel truly special, as if he/she was the only person in the room.

Thelma moved to Prairie Ridge in 2011, splitting her time between Big Fork and Glasgow. She enjoyed her final years at Prairie Ridge being close to family and friends in Glasgow.

Thelma is preceded in death by her husband Marv in 2003; stepson Randy and his wife Sonja Bjorklund; brother Gordon; and grandson Karston Waarvik.

The family would like to thank the staff at Prairie Ridge for the great care Thelma received over the past 11 years and to Valley View for their service the past few months.

Memorials may be made to Valley View Home or the charity of your choice.