What Happens After You Leave the Hospital Post-COVID-19? 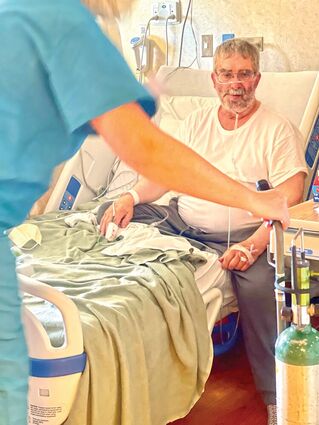 Charles Lee of Malta listens to Angela Roselli, a Benefis Community Care respiratory therapist, explain the details of transitioning to home oxygen after his stay at Benefis Health System for COVID-19. Home oxygen supplies are in high demand, while supply chain issues have kept companies hopping to meet the need.

GREAT FALLS - For Charles Lee in Room 609 at Benefis Health System, the road home to Malta and back to good health will require extra help for his lungs.

He, like many COVID-19 patients, will need supplemental oxygen – a demand that is creating a worldwide shortage.

Before the pandemic, Benefis Community Care employees had an average of 4.5 home oxygen setups a week. A typical setup includes an oxygen concentrator and eight tanks.

Angela Roselli, a Benefis respiratory therapist who specializes in helping hospital patients transition to home oxygen, stopped by Lee's room for tests to determine whether he was ready to go home and to talk over how to continue his care there. She's taken on the work of three people with the sudden demand for home oxygen.

Lee, 61, hadn't been hospitalized a day in his life, he told Roselli. Then his wife started developing COVID-19 symptoms. Then so did he.

Many COVID-19 patients are surprised how quickly they go from good health to struggling to breathe, Roselli said. They haven't smoked, they haven't had pneumonia before, they're not elderly – and yet here they are.

Lee's wife was hospitalized in Malta, population 2,000, but Lee went home after an X-ray showed his lungs were still clear. He used a nebulizer, a device that delivers medicine as a mist, and he rested.

Then his oxygen saturation level dropped to 70% (healthy is 90%-100%). His severe COVID pneumonia had pushed him into hypoxemia, which can result in confusion, dizziness, wheezing, and even brain/heart/organ problems like strokes.

Lee called his son, who with his sister got an ambulance out to Lee's house, and then Benefis Mercy Flight flew Lee to Great Falls, 203 miles from home, for more intensive treatment.

"The care here has been unbelievable," he said. "For everything they're going through, they're doing a great job."

Lee was first treated in the Benefis COVID Unit, and when he was no longer contagious and had recovered enough, he moved to a general hospital room. That meant the addition of a roommate, the result of the hospital's census remaining over 100% all fall.

Lee does his part to recover. He walks as much as he could manage in his room and faithfully does deep breathing exercises with his incentive spirometer.

After more than two weeks in the hospital, Lee is optimistic.

"I think I haven't felt this good in months," he said.

Roselli conducts rest and exercise tests to make sure patients can keep their blood oxygen levels up without the hospital's higher flow of oxygen into their lungs.

"There are so many patients who need assessed that all the respiratory therapists work together to get them home as fast as we can," Roselli said.

Lee started his test by removing his tubing. He needed to keep his oxygen saturation at 88% or better. At rest, his saturation held. Within a few steps down the hall, however, he dropped to 87%. His heart rate shot up as the organ works hard to make up for the low oxygen levels. Some COVID-19 patients get dizzy just walking in their rooms or even just sitting up. Roselli hooked him up to portable oxygen, and they waited for it to take effect before walking back to his room.

"Everything about this disease is crazy," Roselli told Lee.

For rural and out-of-state patients, coordinating care after hospitalization can be complex. The patient needs to know how to work the equipment, needs enough oxygen to reach home, and then needs a company to keep them stocked. Benefis Community Care doesn't reach Malta, so Roselli must coordinate with a national company with an office in Havre.

Roselli has set up patients in their 20s to 90s with home oxygen. Self-pay for a month of oxygen runs about $400.

For Lee, his oxygen need remained just high enough that the doctor nixed going home for two more days. He yearned for home, but he's also grateful to have that chance. More than 2,400 Montanans, among them 24 people from Phillips County, have lost their lives to COVID-19.