'Guilty of Being White' 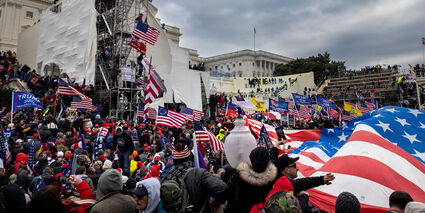 Protesters clamor against the 2021 presidential election results on Jan. 6.

Just after the mostly peaceful protest at the nation's Capitol Building on Jan. 6, for the first time in my life I felt unsafe in my own country.

Not because of the hordes of disgruntled American citizens protesting the presidential election, or their breeching of the federal building, but because many media outlets used it as justification to figuratively attack people just like me.

I am a white male conservative, and a protestant. I am also a dad, so that automatically makes me a part of the "patriarchy."

All of these things are dirty words these days.

You know what though? I ain't sorry, nor ashamed. I am not sad in any way, shape, or form of the color of my skin or that I try to go to church on Sundays.

What I am ashamed of is the mainstream media saying folks like me are the "biggest threat" to America.

What a crock of dung, and the epitome of reverse racism.

Myself and folks like me are being maligned for nothing more than the color of the skin we were born with and for our political and religious beliefs.

I was raised being taught all men (and women) are created equal, and enjoy the same rights under the Constitution. I was taught, and still believe, racism is intolerable no matter what race is being targeted. That includes the Caucasians.

I wonder if Martin Luther King Jr. approves of the what is going on now? The biggest difference between the Civil Rights movement of the 1950s and 1960s was the "Gandhi" approach - civil disobedience without committing violence, even if violence were committed unjustly on the protesters.

This led to sit-ins and marches. Guess what? It worked.

I have never experienced segregation of any form, and racism has largely been absent from my life.

Fast forward to today. While the Black Lives Matter movement has not been as active as it was in 2020 (no presidential election to sway), regular folks are still being targeted.

Think of Kyle Rittenhouse, who was acquitted recently of five charges after killing two men and wounding a third in August 2020 with a sporting rifle during riots in Kenosha, Wisconsin. All those shot were white. Despite him being acquitted justly by a jury of his peers in the name of self-defense, in full compliance with the law of the land, many are now openly calling on retribution against Rittenhouse.

Students at Arizona State University have organized and want Rittenhouse booted from the school, even though he was acquitted. They also demand ASU release a statement against white supremacy and "racist murderer" Rittenhouse.

"There is nothing more frightening in America today than an angry White man," John Blake, an analyst for CNN, said after the acquittal.

OK white folk, no emotions for you. You are not allowed to get mad over issues. Shut up and accept your were born a racist because of the chromosomes passed along to you.

Is there still racism towards African Americans today? Yes. But gone are the days of lynchings while "The Man" turned a blind eye. In my entire life, I have witnessed overt white racism a very few times, small enough to count on the fingers of one hand. That is in the matter of nearly four decades.

Does said racism against African Americans entitle them to seek revenge and be racist against others? Martin Luther King Jr. would say no. He would say to be like Jesus and "turn the other cheek."

Yet, that form of actual peaceful protesting has been abandoned.

Now, the order of the day is revenge and to cause suffering. Equality? Forget about it. It is about domination through fear.

That is not the America I want to live in. What I saw as a kid was a country where people were color blind, where individuals were judged by their actions, not their race.

America is a stew pot of races, and hopefully we can learn to live together in peace. But, that can only happen when racism, in all its forms, is abolished.

That includes against the whites.