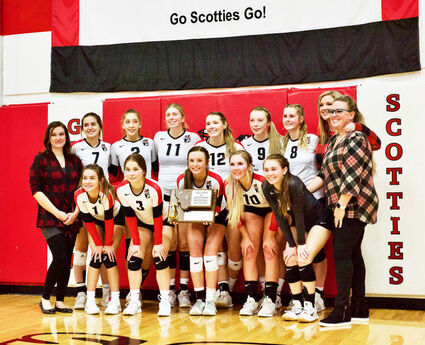 The Glasgow Scotties claimed second place at the Northern B Divisional Tournament in Glasgow this past weekend. *See the Glasgow Courier's Facebook page for additional photos from the tournament.

The Glasgow Scotties volleyball team is headed to the state tournament in Bozeman this weekend. Glasgow earned second place at the Class B Northern B Divisional tournament held in Glasgow Nov. 4-6.

The Scotties swept Conrad and Fairfield on day one to secure their state slot. Friday night, Glasgow faced the Choteau Bulldogs. After a slow start, the Scotties took the match to five games, but were sent to the consolation round Saturday morning. Glasgow got out the broom again against Malta to advance to the championship round.

In the chipper, the Scotties found themselves on the bristle end of the broom despite three hard-fought sets. The match saw Glasgow's ninth appearance in a Divisional Championship game since moving to Class B and marks the Scotties' 12th trip to the Class B State Tournament (15th trip in school history.)

"I am extremely proud of them. They worked very hard and played some excellent volleyball," Scottie coach Somer Hoerster said. "To be playing in the championship match against Choteau is exactly where we wanted to end up." She later added, "The girls played how they need to play to put themselves in the best position to be successful and I can't ask for more than that."

Glasgow won their first match on Thursday afternoon, defeating Conrad 25-17, 25-12, 25-14. Glasgow put up 31 kills, 11 blocks, 11 aces, 46 digs and 29 assists in the three games. Klaire Krumwiede led the Scotties in kills with 10 and in aces with four. Daley Aune and Carly Nelson each had four blocks for the Scotties, while Aune also led in assists with 25. Blaire Westby had 18 digs.

The win moved the Scotties to the evening round and a match against the Fairfield Eagles, who had defeated the Wolf Point Wolves in round one.

Glasgow earned the win in three sets 25-22, 25-22, 25-16 with 26 kills, 16 blocks, seven aces, 44 digs and 19 assists. Nelson led Glasgow in kills with eight. Krumwiede notched nine blocks for Glasgow and Tyann Graham had 13 digs. Aune again led in assists, this time with 19. Abrianna Nielsen and Tatum Nyquist each had two aces for the home team.

The win secured Glasgow's State tournament berth in front of a raucous and supportive home crowd. Hoerster commented, "Glasgow has not taken the easy way to a state tournament in a long time, so winning two in a row and securing our trip to State was lifting a huge weight off of us." The victory also advanced Glasgow to the undefeated semi-final match against the Choteau Bulldogs.

Hoerster described the match as a huge confidence boost for her team, especially after recovering from the first set loss. "The way my team bounced back to take the next two games was pretty impressive," the Scottie coach said. "To keep Choeau to less than 15 points is HUGE."

Hoerster expressed admiration for Choteau coach Ann Funk, noting the team's successes and reputation for winning. The respect was mutual, according to Hoerster who shared Funk's thoughts on the Scotties play, "She was very impressed with our defense also and said it was some of the best she had seen this year."

The loss moved Glasgow to the third-place match where they faced the Malta M-ettes. The Scotties defeated the M-ettes in four sets at the District 2B tournament the week prior. Glasgow proved the District title win was not a fluke with their three-game sweep of the team on Saturday morning 25-15, 25-11, 25-21.

Hoerster acknowledged that the M-ettes may not have been at the same level of play as they were at the district tournament due to their late game on Friday followed by the early Saturday start. That is tough on a team, Hoerster noted.

With win number three of the tournament and a match under their belts, the Scotties advanced to the championship game, again facing Choteau. This time, there was no slow start for Glasgow and the Scotties made the Bulldogs work for their title, which they won in three games 26-24, 25-16, 22-15.

The Scotties are enthused about their trip to state and anxious to achieve more in their final week of volleyball. "Going to state was our biggest goal for this season for our coaches and team. I am so thankful to be able to go the state tournament in Bozeman this year with such an incredibly talented team," enthused Nelson. "In this upcoming weekend I look forward to seeing what we can accomplish on the court together and hopefully bring home a state title for the Scotties!"

Nyquist said, "Our goal is to bring the state title back for the Scotties! I hope we leave everything on the court, give our best performances of the season, and work as one. We've come a long way int eh last couple weeks and we are mentally prepared to go head to head with any team."

"I am super happy and proud of our team for making it to state. It was a big goal for us and I am glad we accomplished it," said Westby. "I am hoping to get a couple wins this weekend, play hard and leave everything out there, and we will just have to see where that takes us."

"Being able to go to State again feels amazing," Nielsen told the Courier. "I am so grateful for my team and everyone's support that helped us get there!" Graham said, "Our team has really stepped up and started to play well together. I feel like we are peaking at the right time. I think we can do great things this weekend!"

"Florence is another team that has had a pretty great run at state for the last several years as well," Hoerster said of her upcoming opponents. Krumwiede said, "Our first team is Florence which is a bit exciting knowing that we have played them and played really well against them!"

"I feel good about our match up being a good battle to start the tourney," Coach Hoerster said. "At this point, no team should be over-confident in anything as it is all going to have to be earned."

Glasgow travels to Bozeman this weekend for the All Class State Volleyball Tournament, Thursday through Saturday, Nov. 11-13. Glasgow opens their play on Thursday at 4 p.m. with a match against Florence-Carlton, the second seed out of the west.