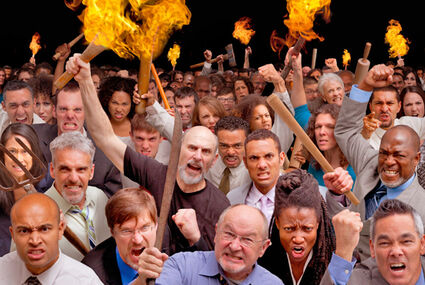 Speak your mind and be heard.

But, do it politely - lest the feds label you as a "domestic terrorist."

To whom am I speaking? Why any parent who attends a school board meeting in these United States and is against mandatory masking or COVID-19 vaccinations.

To be clear, I am not referring to the local school boards in Valley County. I have attended several Glasgow School District board meetings, and they have welcomed public discourse about masking and other COVID-19 related concerns.

Late in the 2020-2021 school year, a local mother spoke during the public comment portion of a regular school board meeting to voice her spirited opposition to masking https://www.glasgowcourier.com/story/2021/05/19/news/to-mask-or-not-to-mask-that-is-the-question/9855.html . The school board welcomed her opinion, and thought on the issue carefully before making a ruling later during the summer months https://www.glasgowcourier.com/story/2021/07/28/news/glasgow-schools-drop-mask-mandate/10059.html .

This was an example of democracy actually working as it is designed to. The constituents were able to approach their elected representatives with an issue, were heard with dignity, and the board deliberated before taking action.

The board, for sure, had and has the authority to in fact require masks and vaccination (as long as they are in compliance with state and federal laws). Whether or not the majority of their constituents would agree with such a decision would become apparent during the next round of school board elections.

"This is the way." https://www.youtube.com/watch?v=uelA7KRLINA

In other states, where mask mandates remain in full effect, some parents have had quite enough. Extremely concerned over the welfare of their children, they have turned out in droves to oppose such mandates. Some have even gone so far as to shout down school board members and even slung Nazi salutes to mock what they believe are fascist school boards.

This is a bit much, but anyone who is a parent will understand another parent becoming highly passionate about subjects concerning their offspring. Wars have started for less.

Are these parents uncouth for doing such things outside of the public comment periods and for hurling insults? Absolutely.

But, they are exercising their First amendment right to "mostly peaceful" protesting. (I think that is how Uncle Sam is considering the First Amendment language now?).

And, to date, I have not heard or seen any credible news sources about actual violence breaking out against school officials over such matters. There have been angry letters and emails sent to school officials (not in Valley County, to my knowledge). But I bet credible threats of death or dismemberment are very rare.

Being the center of public ire should not be unheard of for any elected official. It comes with the territory.

One would think elected officials would have thick skin and be able to shake off angry words and insults.

The current generation in power is very fragile. Think of all the folks just losing their minds over "mean Tweets" during the last administration in power at the White House.

They are so soft, it seems, that now they have called upon the federal government to begin scrutinizing parents who disrupt school board meetings, hurl insults, etc.

(Again, not talking about any school board in Valley County).

On Oct. 4, the Department of Justice announced it is now meeting with various federal, state, Tribal, territorial and local law enforcement leaders to "discuss strategies for addressing this disturbing trend." https://www.justice.gov/opa/pr/justice-department-addresses-violent-threats-against-school-officials-and-teachers

"Threats against public servants are not only illegal, they run counter to our nation's core values," wrote Attorney General Garland. "Those who dedicate their time and energy to ensuring that our children receive a proper education in a safe environment deserve to be able to do their work without fear for their safety."

Welp, better not call that school board member a "son of a motherless goat." https://www.youtube.com/watch?v=YCW1UlylHbs . You may get lumped in with the terrorists who carried out the September 11 attacks. Off to Guantanamo Bay with you!

I am not even joking. In a letter to President Biden penned by the National School Boards Association (NSBA) dated Sept. 29, protesting parents are referred to as "hate mobs." The NSBA called on Biden to use "the PATRIOT Act in regards to domestic terrorism" (now defined as angry American parents as opposed to anti-capitalist extremists or religious zealots). Read the full letter here: https://www.nsba.org/-/media/NSBA/File/nsba-letter-to-president-biden-concerning-threats-to-public-schools-and-school-board-members-92921.pdf?la=en&hash=642B7B91E0029BA4427D0F38D7054A007537160F

Throughout the letter, NSBA officials cite various news articles around the country as cause. Luckily they went to college and know how to list their sources. So, I began reading the articles for myself. All I found, so far, was a bunch of angry parents hurling insults at board members, refusing to wear masks and speaking out at meetings but not during established public comments periods. To be sure, such behavior is definitely rude. But, local politicians are the most accessible form of government. It is likely easier for a resident to be heard by a local official then a U.S. Senator, for example.

Do parents have the right to be heard? Absolutely. But during the public comment period. And remember, the calmest of speakers with eloquent words can be far more excoriating than a brute spouting language fit to make a sailor blush.

If the officials won't hear you, take it to the streets. That is still legal under the Bill of Rights.