This Time Just For Fun 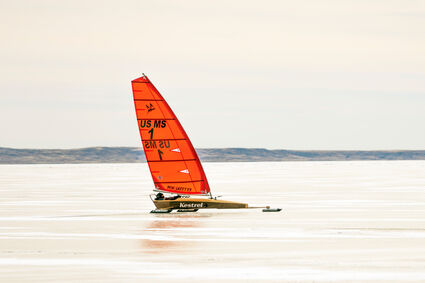 For the second year in a row, Fort Peck Lake became a mecca for ice sailors around the country, but unlike last year, this year the crews were traveling just for the fun of it. According to pro photographer Sean R. Heavey, the ice was perfect, and a number of sailors had some other business to attend to, so they made their way to some of the best ice in the country. Thanks to high temps, thick ice and lack of snow, the reservoir was solid and mostly clear of obstructions and snowfall. For those reasons, about 10 boats and crews came out to race the high winds on the smooth ice. John Eisenlohr sailing a Mini Skeeter class ice yacht on Fort Peck last week. Last year, solid ice conditions brought the North American Championship Race for the Detroit News Class ice yachts to Fort Peck stealing it from the Midwest and bringing it to Montana for the first time in the competition's history.