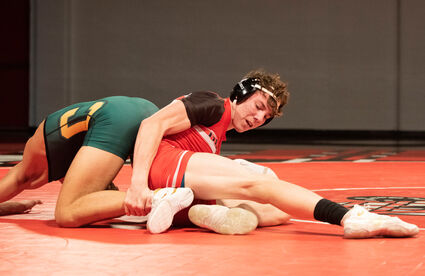 Devon Nesbitt holds down Colstrip's Garrett Buckalew during the Scottie wrestler's 7-5 Decision win during the Glasgow Mixer Tournament on Jan. 30.

The Glasgow Wrestling squad traveled to Glendive on Friday to hit the mats against the host team and the Sidney/Fairview JV squad before hosting a mixer on Saturday in the Dawg Pound. The Scotties brought home two wins from their road duals, taking Sidney/Fairfield by a score of 63-6 and defeating Dawson County 48-27. At home the Scotties took 10 wins and dropped 12 matches.

"We had a good day in Glendive," said Jory Casterline, saying his boys had some good matches on the road. The team took 12 wins over Sidney/Fairview, including three wins by forfeit, and eight wins, including three forfeit wins, over Dawson County. He was not as happy with the team's performance at home, noting, "Obviously, we've got some things to work on." However, with four of his varsity wrestlers on the bench the mixer gave the younger wrestlers more time on the mats.

"The underclassmen are wrestling very good and they continue to get better and be better," said senior Colten Fast. "A few that have impressed me the most are Kohl Kittleson and the Nesbitt brothers are also continuing to step up and keep on getting better." In fact, Devon Nesbitt drew loud cheers during his two match ups and had a good day in front of the home crowd, as did brother Damien Nesbitt. The two wrestlers each won their two matches. Kohl Kittleson also won big at home, defeating both his opponents by pins.

Fast had only one match at home, but won in under a minute, pinning Ian Willoughy of Colstrip in 43 seconds. Sitting out of the meet were Mayson Phipps, Dylan Nieskens, Kyler Hallock and Cooper Larson. Larson, out with an injury, said it is "healing nicely" and he is hoping to be back in action sometime next week. Hallock told the Courier he was dealing with sickness right now, but is "looking forward to wrestling my best and doing great" for the remainder of the season.

This week, the Scotties had one road trip and will host two events at home. "The home events are nice because we don't have to travel on a bus for hours," said Fast, "and the crowd is a lot better at home." The Scotties traveled to Poplar on Feb. 2 for a meet against Poplar and Circle. On Friday, the team hosts Baker, Wolf Point and Malta at 5 p.m. in the Scottie gymnasium. Saturday the team hosts a triangular with duals against Whitehall and Fort Benton/Big Sandy with action beginning at 1 p.m. in the Scottie gym.