By MICHELLE BIGELBACH
THE COURIER 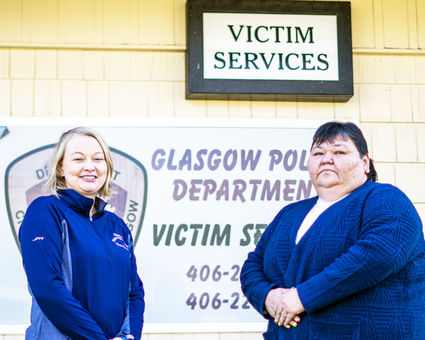 Jewel Etherington (l) and Margaret Henry (r) pose in front of their office in downtown Glassgow.

Glasgow Police Department's victim witness specialists Margaret Henry and Jewel Etherington have been the shoulder to lean on, the ear to listen and the rock in northeast Montana this year for victims and witnesses of crime. Etherington, who has been in the position since July, and Henry, who has been in the position since October, currently serve Phillips, Valley, Daniels, Sheridan and until recently Roosevelt County, in helping those who have been affected by crime, whether it's providing resources, navigating through the judicial system and/or providing a safe place to talk.

As victim witness specialists Henry and Etherington help victims of crime from the time of the incident, often arriving on scene once called, through the entire court process including testifying and sentencing of the perpetrator. In addition they will accompany the victim to the hospital when medical attention is needed, provide resources to victims by utilizing community resources to obtain temporary housing, clothes and other necessities while also assisting with testimony preparation if necessary.

"The victim doesn't always get notifications when court hearings are coming up. We work with the county attorney to notify the victims of court hearings and also educate them on what will happen in the hearings. If the victim has to testify, we provide help to reassure them such as showing them the courtroom and how the court will be laid out. We also set up meetings with the prosecutor prior to any major court hearings to go over the testimony and prepare them," explained Etherington. "I have sat with victims in a safe area, let them know what will happen and reassure them it's okay to tell their story," piggybacked Henry.

In addition to assisting with helping victims of major crimes, Etherington and Henry also assist victims with restitution for small misdemeanor crimes, identity and fraud protection as well as victims of DUIs, as a few examples. "Any crime that has a victim or witness, we help with," stated Etherington, though she did stress they don't assist with civil proceedings.

It's not all about victims and crimes for Henry and Etherington as they are also working with Elissa Erickson of Hi-Line Homes to bring the ROAR program into daycares, preschools and classrooms up to second grade teaching children safe touches, knowing who to go to when necessary as well as letting someone know when something isn't right. They are working on getting the program to schools in other counties as well as working on getting a program for older children, up to high school age, implemented that deals with trafficking and grooming.

All of Etherington and Henry's endeavors, including the ROAR program, are funded through a federal grant distributed by the Montana Board of Crime Control through the Victim of Crime Act (VOCA). The grant has been reapplied for by the city over the years and provides the ability for the service to continue to be offered in the areas that are served. The grant also provides the ability for community members to volunteer their time to do office work including filing and raising awareness.

Henry has been in this line of work for 14 years, all in Wolf Point, before taking the position in Glasgow. When Henry relocated, Roosevelt County lost their advocate, which promoted the area to be expanded that is being served by the victim witness specialists. She first got into the position when she was taking college courses and was looking at a field practicum. She decided to check out the program and volunteered her time finding out as time went on how much she enjoyed helping people. After graduation, the coordinator of the program asked her to come work as a result of her volunteer work and she has been in the field ever since. Henry credits the ability to help others for her motivation to stay in the field for so many years.

"Just saying a few kind words help make a person's day. In my years I have seen many victims and there is a wide array and different types of crimes out there. I like to help people, so if I know there is something out there to help, I will do it," stated Henry.

Though Etherington is new to the field, she has always been interested in criminal justice and the sociology as well as the psychology of crimes. When she worked with the Marine Corp as a family readiness officer, which is a family advocacy position, she advocated and helped families through deployments of their loved ones. She has always wanted to help people and be there when the worst strikes.

"No matter what, bad things happen but there are always people there to guide and help. Working this job and the bigger cases, I have realized this is what I want to do. Someone needs to be there for the victims," explained Etherington.

Henry admits the job requires thick skin and the thickness grows with each call. "We have to leave what we have encountered at work," she explained while Etherington echoed, "You have to turn off the emotion when arriving to the scene and be the stable one in the room. It takes a special type of person to be that calm, reassuring person and not bring it home." Though Etherington admits having the support from the Glasgow Police Department makes all the difference. By working out of the Glasgow Police Department, both Henry and Etherington have the support of the officers to be able to discuss what they are experiencing and feeling. Etherington admits having this relationship with the police department is special as most victim witness specialists work out of County Attorney offices and don't have that ability.

Though the community is not able to directly assist Etherington and Henry with donations, they stress individuals can assist by donating to the various resources in the community including Coat Closets and the Ministerial Association. "We have a few things on hand such as diapers and clothing but when we need something we utilize the resources that are already established in the community. Also if we need to purchase something we try and buy local" explained Etherington. "That was the one thing that shocked me in Glasgow, someone is always willing to help," stated Henry.

Both Etherington and Henry welcome anyone to talk to them at anytime by contacting the Police Department at 228-8050. "We are not uniformed, we are not badged, we don't carry. We can meet anyone at any location and just let them talk," stressed Etherington.