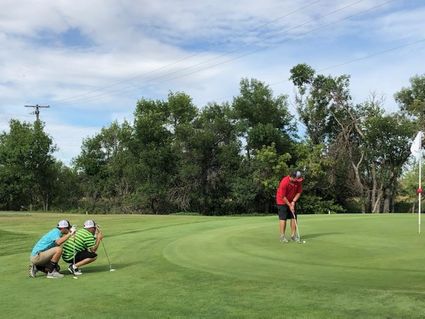 Dylan Hughes attempts a putt at the Colbrese Memorial Red Ball Tournament at Sunnyside on Aug. 8. while Sam Tedrow (r) and Todd "the Sunnyside Sizzler" Tryan (second from left) look on.

The sun shone on another successful Colbrese Cup Memorial Red Ball Golf Scramble on Aug. 8. The annual Glasgow Area Chamber of Commerce and Agriculture event brought out dedicated golfers eager to take advantage of a beautiful day and a chance to win at the biggest golf-payout tournament of the year while honoring the memory of Terry Colbrese.

Sunnyside board member and Chamber member Lindsey Peterson told the Courier, "We gathered as friends, coworkers, volunteers, family and as a community to celebrate a friend who is dearly missed. The weather was perfect, turnout for teams was even better. Couldn't have asked for more."

"The greatest show on grass," was how Sunnyside Country Club manager and Chamber member Andy Newton described the event. Though the tournament is normally limited to 27 teams, this year's event was held to 19 to allow for proper social distancing, per recommendations from local and state health officials.

Team Colbrese was there again this year, playing in honor of the memory of Terry Colbrese. Hitting the links and taking home a prize recognizing their participation were Lynsey Reyes, Tara Bullock, Jolene Reyes and Breanne Jensen.

Newton said even though the number of teams was limited this year, it was a tremendously fun tournament. "Low-key but a blast," he told the Courier.

Peterson added, "The tournament committee and the Glasgow Chamber look forward to keeping this annual golf tournament going." Newton said that this year the tournament sponsors truly came through for the event. "Our sponsors were eager to help out and contribute. They're really looking to get out and help out the community," he said as he explained how the tournament would not have gone on without the generous support of businesses and donors. "We really want to thank them for helping make this happen."