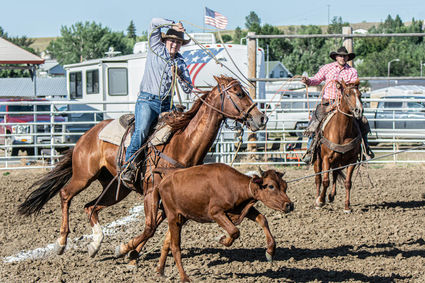 Jesse Orahood heels a steer who attempts to escape her lasso during the 2020 Old Mil Ranch Rodeo Scramble held July 25 at the Northeastern Montana Fairgrounds.

"They're getting that rodeo action where they can." Announcer Myron Malnaa sounded pleased that not much can deter ranch diehards, who came out to compete and celebrate National Day of the Cowboy in the Middle of Nowhere.

With accommodations made for social distancing and mask wearing, cowboys and cowgirls launched themselves into their saddles, and out again, to compete in a ranch rodeo scramble. The new concept this year had teams running multiple events at one time, making for nonstop action in the arena. The crowd whooped and hollered from the grandstands as the competitors worked on branding, penning, doctoring, stray gathering and trailer loading.

This year saw 12 four-person teams enter the Rural Communities & Agriculture Neighbors (RCAN) sanctioned event. The team of Jim Orahood, Jesse Benson, Ted Brown and Jess Korman claimed the top spot, finishing all five events in just two minutes, 52 seconds. They will compete at the RCAN finals to be held in Malta in January.

This year, the Glasgow Rodeo Committee brought back the top five finishers to let them have a run at a winner-take-all pot of $500. Taking the pot and the top spot with a time of 2:43 were Walter Ozark, Ted Brown, AJ Crasco and Jesse Benson.

The Glasgow Rodeo Committee expressed gratitude to the event sponsors, Nemont Beverage, Cottonwood Inn & Suites, Montana Gifts & Treasures, Pankratz Angus & Trucking, Valley Vet Clinic, J & M Distributing, Robyn's Nest, and C & B Farm Equipment for allowing the committee to proceed with their event despite the challenges presented this year. In the words of Malnaa, they are doing their part "to keep our western heritage alive."