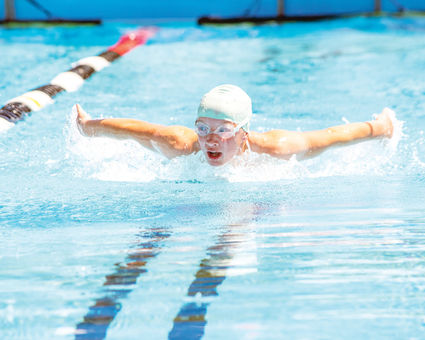 Kira Beck of the Glasgow Thunder checks the competition during her heat of the 50-meter butterfly on July 4.

The Glasgow Thunder stayed home this past weekend, but did not have to host the latest West of the East meet. That privilege fell to Harlem whose pool is out of commission for the time being, so their swim team has been hitting the road this season. In total, six teams made the trip or stayed home to partake in the Fourth of July competition in Glasgow.

According to Thunder head coach Ethan Shrader, the meet was a success for the team as athletes shaved seconds off their time, completed races and advanced through the meet. He told the Courier, "Oh it went well, they all swam amazing and are still dropping time."

The Glasgow Kiwanis Swim Team will head to Lewistown on July 18 for the last of their regular season meets smack dab in the middle of Montana. The week after, the region will host a season close-out meet in either Sidney or Roundup, but there will be no post-season competitions this year due to the COVID-19 pandemic.

For highlights, Coach Shrader wrote the following points from the meet:

"Dalton Sand, 15 years old ,took second in the 100-meter freestyle in a real close race. He swam a 1:01.01 and has really been working on his kick for tempo (speed). He also won the 200 I.M. and the 400-meter freestyle, this being another race that came down to the finish.

"Raelee Dowden won her 100-meter butterfly in an impressive show of her talents. Her under-waters were unmatched.

"The eight and under girls freestyle relay took first.

"The girls 15 and over freestyle took first in an epic show of sprinting and kicking. They also took first in the 200-meter medley relay.

"Every swimmer swam their best races, and our team is looking forward to the rest of the year. I am excited to see how every swimmer will only improve from this meet to the next. We still have a ways to go, but every swimmer swam with all their heart and I am proud of what we accomplished this weekend. We also took second place as a team overall, which is a major improvement, and we will continue to work hard throughout the rest of the season.

"The teams that were there were Malta, Chinook, Harlem, Lewistown, Roundup, and Glasgow.

"They also had a coaches Alumni relay during one of the breaks on Sunday. I swam the breaststroke leg, Katie Kaiser swam the backstroke, Rachel Billingsley swam the butterfly, and Michelle Huntsman swam the freestyle. It was fun and tired most of the coaches out."