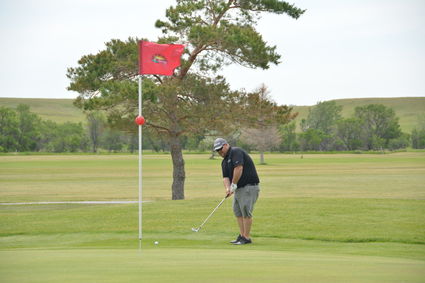 Jake Hughes puts the ball on the green at the Sunnyside 3 Club tournament on June 13. He would go on to win his flight in the tournament.

Golf in the best of conditions is a challenging game. Whipping wind is expected in northeast Montana and adds another degree of difficulty. Limiting golfers to just three clubs for 18 rounds is a recipe for entertainment, for observers if not the participants.

A bevy of colorful phrases was heard across the course as golfers struggled to put their little dimpled ball in the hole in an acceptable number of strokes during the 3 Club tournament at Sunnyside Country Club on June 13. At the end of 18 holes, Jake Hughes emerged with the fewest strokes to take the X flight and Spencer Marsh claimed top honors in the Z flight.

The golfers were divided into the two flights based on their handicaps and teed off at different times to allow for social distancing. The ubiquitous wind helped mitigate the high temperature as the day heated up. The day was beautiful, even if the scores were not. Despite the high number of strokes due to the lower number of clubs, golfers laughed about their games.

"Uh, do you really want to know?" joked Cory Hallock when asked about how his game was going. Challenged that he would not be able to putt with a wood, Andy Newton replied, "Watch me." Jesse Hystand wondered if he could count high enough to record his strokes. Even though the day proved more challenging than might have been expected, all golfers made it through the 18 holes and the day.