30 COVID Tests So Far at FMDH 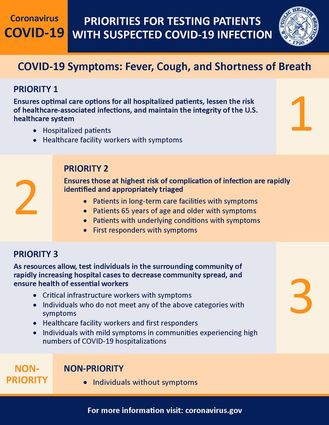 Frances Mahon Deaconess Hospital is reporting that they have conducted 30 tests at their facility since testing for the COVID-19 disease became available in early March. Those numbers do not reflect the total number of Valley County residents that have been tested since some people may come from other areas and some residents may have been tested outside of Valley County.

FMDH said that the low numbers of tests performed thus far are a direct result of the public's commitment to social distancing and other preventative measures, before stating, "As of April 8, 2020 we have submitted 30 tests for people that meet coronavirus CDC testing guidelines, and all tests have returned negative."

CDC testing guidelines leave much of the testing discretion in the hands of clinicians and local and state health officials. The guidelines say that not all patients should be tested and that many cases can be recovered from at home. They further state, "decisions about testing are at the discretion of state and local health departments and/or individual clinicians."

In response to a clarifying question regarding local testing, Frances Mahon sent the attached graphic from the U.S. Public Health Service that prioritizes testing subjects but does not list criteria for suspecting and screening cases before performing tests at the hospital. (See that graphic above).

FMDH spokesperson Kyla Burns added, "people that come in are tested if they fit into priority one and two, and then priority three is tested if there is reasonable knowledge or evidence to support a test (travel history, known contact with positive cases, etc). Our medical staff assess our patients using differential diagnosis, so it is definitely a case-by-case basis."

Currently there are over 30 Montana counties reporting no COVID-19 cases as of April 8. Most of those counties are in eastern Montana. In fact, all counties east of Yellowstone County are reporting no cases with the exceptions of neighboring Roosevelt and Richland counties along the northern North Dakota border. Richland County recorded two new cases and Roosevelt recorded one new case in the last 24 hours.

Tribal council member Kaci Wallette posted about two cases associated with the Tribes to Facebook this morning. Those cases were confirmed by the Courier to be the same cases reported in Richland and Roosevelt County overnight. According to those with direct knowledge, the two individuals work in Poplar but one lives across the border in Richland County.

The FMDH press release stated that Montana as a whole has implemented more tests per capita than 30 other states in the Union. That data was based on the COVID Tracking Project, a data availability project spearheaded by national media outlets since no government database provides the numbers.

It is difficult to say how the numbers in Valley County compare to the rest of the state though, since that data is not tracked by the Department of Health and Human Services or the Governor's Office. The county has more than 7,000 residents making the per capita rate of testing occurring in Valley County around .4 percent since the outbreak began. The statewide testing rate, based on population estimates from Census.gov, puts the state's per capita testing rate at around .6 percent.

In response to a question from the Courier during a press call April 7, Governor Bullock said that testing was not being tracked by county because not all tests being completed in a particular county were from residents of that county. The Governor alluded to the fact that they did not want to deter people who are outside their county to go and get tested by tracking those numbers.

A question and answer response sent to the Courier by the Valley County Health Department from the state made a similar point saying, "It is very challenging to report the number of COVID tests performed by county in Montana. One challenge is that the information we have is the location of where the test was ordered and not the county of residence of the patient. DPHHS reports cases by county of residence. Patients don't always seek care in the same county as their residence, especially in our more rural counties. So the challenge we have is that DPHHS is not able to confirm county of residence of the thousands of patients with negative results."

"Social distancing may feel like an inaction, it most assuredly is not. As you sit at home you are protecting yourself, along with everyone else in our beloved community," read the FMDH press release, which later added, "It is the professional opinion of the FMDH Medical Staff that these measures the community is taking are working to decrease the spread of COVID-19. [We] encourage everyone to wear a cotton mask in public as recommended by the CDC and to continue to comply with the directives put out by Governor Bullock as well as Valley County Health Officer Dr. Anne Millard as we continue standing together, while apart."