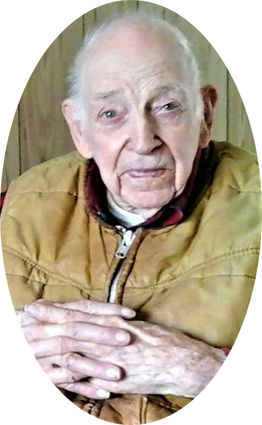 Sidney was born on May 1, 1921, in a log cabin on the left bank of the Milk River at Miles Crossing on property homesteaded by his father in 1902. When Sidney reached school age, the family moved north to the coulee in order for him and his sister Grace could attend North Bench country school. When the time came for higher education, they spent school terms in a boarding house in Hinsdale, and graduated together in 1940, after which Sidney joined his father in farming operations.

Like many neighbors, Sidney was called into service during World War II. He enlisted in the Army and was initially shipped off to Chicago, a place very much unlike the left bank of the Milk River. This, in no small way, opened his eyes and began to expand his world. He was subsequently trained as a mechanic specializing in Pratt & Whitney airplane engines and was transferred to various stateside locations. His service was interrupted by a bout with polio which lasted more than a year, after which he was assigned duties of managing the soldier's social center and the military mail delivery. He attained the rank of Corporal before returning home to resume farming with his father.

Margie Plotts eventually joined him on the farm, and they were married in California. They enjoyed many years together sharing music, socializing, and operating the farm. She preceded him in death.

Sidney enjoyed storytelling and social events in general. He traveled with friends, Don Timm, in particular, to points as far away as the Northwest Territories, and Mexico. In Mexico they found themselves in the midst of a political upheaval, feeling a bit conspicuous as two tall gringos. He enjoyed many hunting and fishing excursions to faraway places. His sister Jean joined him on the farm following her retirement in Seattle. In 2005, they traveled to Sweden to reconnect with kinfolk. This was a highlight in his life, as was a reciprocal visit to Hinsdale by Swedish relatives.

Sidney's mechanical abilities were legendary, owing to knowledge passed down to him from his father as well as his own inquisitive nature. He could disassemble, study, rebuild, modify, and repair anything from a pocket watch to a combine. He was proficient with the simplest tools as well as those as complicated as a lathe. He also manufactured parts, gadgets, and equipment from scratch as needed. Throughout his life he willingly shared his knowledge and assisted his neighbors.

Sidney was an active member of Kyle Masonic Lodge and American Legion Post 45 in Hinsdale, and at one time, served on the board of the Farmer's Union elevator.

He was an adventuresome soul who enjoyed taking on challenges and risks after careful evaluation of potential pitfalls. He was an avid historian and storyteller and could hold a room in rapt attention while recounting his adventures and mishaps.

In lieu of flowers please make a donation in Sidney's name to the Hinsdale Ambulance Service.