Tournament Fills up in Record Time 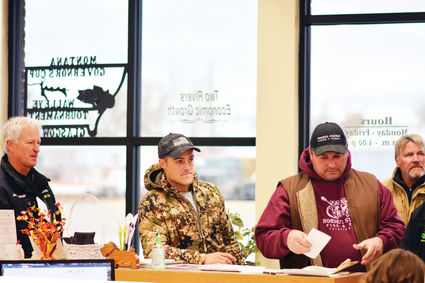 One of the 2019 Montana Governor's Cup champions, Matt Poole (r) waits in line to submit his application for the 2020 tournament. Poole's application was accepted just moments before the tournament filled up on Nov. 1.

One hour and one minute. At 9:31 a.m. the Montana Governor's Cup Walleye Tournament was unofficially full.

While Glasgow Area Chamber of Commerce and Agriculture Executive Director Lisa Koski was expecting people to be camped outside their door the morning of Nov. 1, she did not expect the tournament to fill up as quickly as it did. "Unbelievable," was her description of the turnout this year. "Controlled chaos, yes that describes it."

As Koski had predicted, hopeful anglers were lined up at the door long, long before the Chamber opened. Word among those in line Friday morning was that some people had arrived at 2 a.m., and still were not the first ones in line. Director Gregg Hunter told the Courier he saw license plates from Washington, Idaho, Wyoming and Minnesota in the parking lot. "The Shopko lot wasn't that full when Shopko was open," he laughed as he processed applications.

Eliminating phone call applications for the first time appeared to work well for the Chamber as this is the fastest the event has filled up, a marked difference from years ago when the tournament wouldn't fill up for months. Some technical difficulties did occur with email applications, which prompted the organizers to plan for a dedicated email address for next year's sign-ups.

Some who waited in line left disappointed. Hunter remarked that a couple of fishermen had driven 12 hours to sign up, but were relegated to the waiting list at 9:32 a.m. Matt Poole, one of the 2019 Gov Cup winners, slid in just in time to get his application in this year. Incomplete applications were turned away, and all other applications will be re-reviewed further to be certain all necessary information was inlcuded.

Applications were accepted via fax, email or walk-in this year, making it the first time the Chamber did not accept applications over the phone. In fact, Chamber staff turned off the phones to thwart any would-be callers.

The 33rd Annual Montana Governor's Cup Walleye Tournament will be held July 9, 10 and 11, 2020. There will be a 100 percent payot for participants with day money paid on a sliding scale and final payouts going to the top 20 percent of the field. The Gov Cup is part of the Fort Peck Lake Championship series.