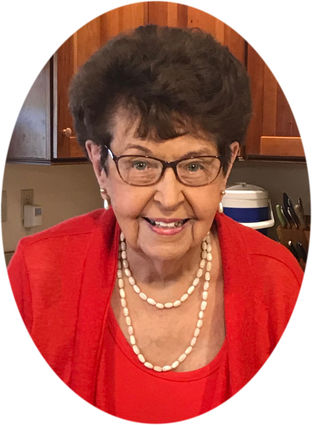 Burial will be in Hillview Cemetery, Hinsdale, Mont. A luncheon will be at the Willie Nelson American Legion Post #45 in Hinsdale following the burial.

Ruth was born on July 5, 1920, at 6 a.m. (a hot Monday morning) to James Chittick and Jessie Mae (Hill) Beil at their farm home north of Hinsdale.

"The year I was six, our house was built and also the school I attended through eighth-grade which Dad was instrumental in getting the school. At the time I finished eighth-grade, students took state exams in order to pass into high school. I was pretty proud to come in second in all of Valley County. Graduates were invited to celebrate in Glasgow, which was exciting: we went to a movie, received awards at the high school, The Scottie Band played, and both the Governor and State Superintendent of Schools were there. While attending Hinsdale high school I lived at the dormitory during the week (I liked it) graduating in 1938. I attended Margaret Woods School of Cosmetology in Great Falls, Mont., from 1940-1941. I owned the Hinsdale Shop from 1941-43.

"World War II began and I felt very patriotic, but also wanted to get away from Hinsdale, so I joined the WAAC. I didn't tell my parents until after I joined, but they thought it was ok. When I got told that I was going to Camp Monticello, Ark., I thought it was the end of the world-but it was rather nice. One of the first things we had to do was run down a pig that was on the post to kill snakes. I didn't run fast. This camp was built for Japanese detainees, but our WAAC Detachment was first on the base. My first day there, I was given the job of waking the girls in my barracks. Even though I had borrowed an alarm clock, I slept right on. The officer in charge realized we hadn't had much sleep the night before and so forgave me. The Mississippi River had flooded, so when it was time to leave, no trains could get through, so we spent an extra few days there. Most of us were afraid we'd be sent to 'Cook and Bakers School'; a few were. When word came that many of us would go to New York City to the Army Post Office, we were elated. The Army had taken over a 12-story hotel, the Collingwood, which was filled with WAACs, but it had no KP and some maid service. I worked in the section for mail that hadn't been delivered. It was really exciting for a young Hinsdale, Montana, native to get to the city. It took several days for some of us to go further than the end of the block. Of course, we marched to work. There were always free tickets for such things as plays, Metropolitan Opera and sports (that I wasn't too interested, but did go once to Yankee Stadium over in Brooklyn). One summer we each had a week of R+R at Vassar.

"At the end of the war, I didn't have quite enough points to leave the service so was sent to Camp Shanks, near Nyack, N.Y. There I worked in the Identification Department where fingerprints and pictures were taken. We had German POWs and Italian detainees come through: the Germans were very sullen but the Italians were happy-go-lucky. I was sent from New York to Camp Beale, Calif., for my discharge, it seemed a little stupid, but that was the first time I had seen palm trees. After the discharge I stayed overnight in a hotel across from the Capital in Sacramento. Then it was home in a very old railway car. I believe, that was about January 4, 1946.

"After staying with Mother and Dad for a few months, I came to work in Glasgow. About 1949, a young woman came to Glasgow to organize a Beta Sigma Phi Group. It has been a very fine organization for young women. I was president a couple of times and made some very good friends. In 1951, another operator and I opened a beauty salon on 4th Street, where the Clansman once was. I operated that until 1962 when I had the chance to go into the Big "G" Shopping Center. (In 2007 Ruth retired at the age of 87.) In 1966, I joined the Eastern Star at Hinsdale. I have been quite active. I was Worthy Matron two times and have held several offices. In 1947 I was talked into joining Emmanuel White Shrine in Glasgow. I was sure I would never be very active, but was voted into office when I was on vacation and after that went to the east as Worthy High Priestess. I held that office for many terms and loved it. It was a sad time for many of us when we had to give up our charter.

The Tetons in Wyoming was great, Indiana, Seattle, Minneapolis several times, Glacier and Yellowstone Parks many times. In 2001 Dave and Lora graciously allowed me to accompany them to New York. The highlight was to hear Ginger solo at Carnegie Hall. That same year Gene, Evelyn and I went to Indiana to visit relatives and how glad we were to have gone then as so many of them passed away soon after."

She was preceded in death by her parents, Jessie and James Beil; two brothers, Lewis and Gene Beil; and one great-great-nephew, Dustin Beil.

She will long be remembered for her appreciation for the small joys of life and her determination to speak her own mind.