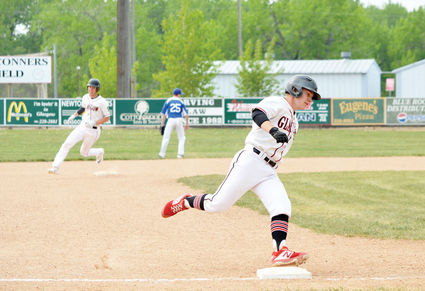 Gavin Adkins (front) and Kaden Fossum round the bases during a June 1 game vs. Glendive at Bill Conners Field. The Glasgow Reds lost their first game of a double-header to the Blue Devils 7-3, but won the second match-up 2-1.

The Glasgow Reds were defeated by the Glendive Blue Devils in their first game of the 2019 season, 7-3. The game was the first of a double header held at Bill Conners Field on June 1.

The Reds battled through some costly errors earlier in the game...