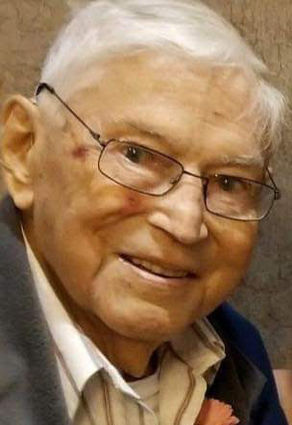 Robert "Bob" Bushman passed away at his home surrounded by his family on Thursday, March 21, 2019.

Bob was born March 30, 1924, in Wolf Point, Mont. The eldest of 10 children, he was born to Thomas and Victoria Beauchman. Bob and siblings were raised and went to school in Wolf Point.

He worked doing miscellaneous jobs around Bainville, Wolf Point, Frazer and Poplar, until May 21, 1943, when he enlisted into the Army as a Private 1st Class for the U.S. Army Corps of Engineers during World War II with the 699th Petroleum Distribution Engineers in China-Burma- India (CBI) Theater of Operations. While enlisted he earned several medals including the Army Good Conduct Medal, Asiatic-Pacific Campaign Medal with one bronze star, World War II Victory Medal, Honorable Service World War II Lapel Button, three overseas bars, and the World War II Commemorative Medal. He was honorably discharged on Oct. 3, 1945.

He returned to Wolf Point where he met the love of his life and best friend, Rosemary (Pat) Morgan. They married on Oct. 26, 1946, in Glasgow, Mont. After living in Bainville and Glasgow, they settled in Fort Peck.

Bob and Pat have 11 children, nine girls and two boys, which included a set of twins, raising all of them in Fort Peck. Bob retired from the Corps of Engineers in May of 1979 at which time they decided to move to Belt, Mont. While there, Bob was on the volunteer fire department, worked part-time at the State Liquor Store, and had a column in the Belt Valley Times for which he wrote stories. In 1991, they moved to Malta, Mont., and made this their home. Bob and Pat loved to travel, traveling to Georgia to see his brother or to North Dakota and South Dakota to see two of their daughters. On Aug. 16, 2000, the Lord called Pat home.

Bob remained in Malta living with daughter Ruby Bushman who moved in to care for him. Ruby would take him on his yearly trips to North Dakota and South Dakota. Bob loved spending time with his family. His favorite past times were fishing, hunting, and playing poker with his kids, especially his grandsons. His grandsons thought they could beat their Grandpa at cards, but it always turned out the other way around. Not only did Ruby take Bob on his yearly visits to North Dakota and South Dakota, but she was there to take Bob to his doctor appointments in Billings or Great Falls, taking him to the hospital when needed, caring for him after his surgeries. If Ruby was unable then one of the other siblings would step in to assist, but for the most part Ruby was there 24/7. The last few months Bob's health declined drastically to the point Ruby put her job on hold to care for him. Enough thank yous cannot be said to her for what she did.

He is preceded in death by his wife; parents; three sisters, Sue Ramona, Ruby Nelson, and Dean Gay; three brothers, Thomas, Albert and Franklin; one son-in-law, Gerald Moe; and one granddaughter, Amanda.

Bob impacted several lives during his 94 years of life and will be dearly missed by everyone.

Rosary and visitation was 6 p.m., Tuesday, March 26, at the Kirkwood Memorial Chapel. Mass was 10 a.m., Wednesday, March 27, at St. Mary's Catholic Church in Malta. Interment with Military Honors will be in the Malta Cemetery.

Condolences for the family may be left at http://www.kirkwoodneralhome.com.