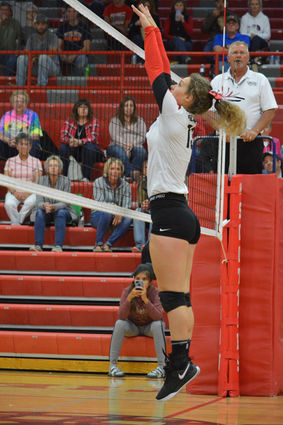 GHS junior Laura Ross goes up for a block at the net during the Scottie's game vs. Harlem on Sept. 14. Glasgow defeated the Lady Wildcats in three sets.

The Lady Scotties hosted the Harlem Lady Wildcats for a conference match-up at Scottie gymnasium Sept. 14.

Harlem stepped on the court ready to play and put forth a scrappy effort in front of a strong group of supportive fans. "I was super impressed with Harlem," said head coach for the Scotties, Somer Hoerster. "They worked really hard on their side of the net."

Glasgow had their fair share of support in the stands too, led by the ever-enthusiastic Scottie cheer squad. Ultimately, the Scottie fans were rewarded for their efforts with three wins against the Lady Wildcats, 25-14; 25-11; 25-12.

For the Scotties, senior Tehya Campbell led her team in kills (seven) and aces (nine). Cordelia Nickels had eight digs over the three sets and Rachelle Glaser finished with 27 of the team's total 28 assists. Keely Fossum had the most blocks for Glasgow.

Hoerster was happy with the overall performance against Harlem. " We had a bit of a slow start," she said. "But once we settled in, the girls played really strong."

"We played with a lot of enthusiasm and seemed to be having fun out there which is important," added Hoerster. "The smiles were nice to see."

Coming up for the Lady Scotties is the Dickinson Tournament, which will provide plenty of tough competition for the girls. "Dickinson is tough in general," explained Hoerster of the two-day tournament. "There are some AA schools there and we have Skyview in our pool. We play them last on Friday evening so that will be a good test to see how in shape we are after a long day of playing."