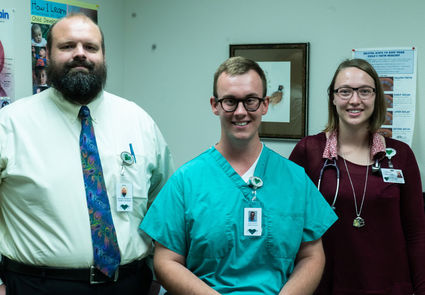 University of Washington, School of Medicine Students Mike Robinson (l), Alex Kurtz (c) and Keenan Kuckler pose for a photo at the Glasgow Clinic. The three will be training under Dr. Anne Millard for the summer as part of a rural outreach program.

Three medical students from the University of Washington, School of Medicine are training at the Glasgow Clinic as part of the school's Targeted Rural UnderServed Track or TRUST. The students, who are third-year med student Keenan Kuckler, two-year med student Alex Kurtz and one-year med student Mike Robinson, are each at different levels of their medical training and are in rural Montana to learn about the differences in providing care in rural regions.

For the most part, TRUST is a program that is intended to connect students to a single rural community for three of their four years of medical training through a summer intern program. Each student assigned to the Glasgow Clinic will therefore serve each year at the same clinic. According to the program's literature, "after a targeted TRUST admissions process, first year TRUST students are linked to underserved communities, which will be their underserved home throughout all four years of medical school." The desired goal is to increase recruitment to underserved communities in the WWAMI Region, consisting of Washington, Wyoming, Alaska, Montana and Idaho.

The three students are currently working under Dr. Anne Millard of the Glasgow Clinic to undergo familiarization with rural medicine. All of the students have some sort of tie to Montana. Kuckler, who is furthest along in her med school training is originally from Billings, Mont., and has had medical school ambitions as early as 12-years-of-age. She attended Skyview High School and then graduated Rocky Mountain College before going on to medical school. According to her program bio she has, "fallen in love with this community and its surrounding areas since I first visited in 2016."

Kurtz, who is in his second year of medical school, grew up in Glendive, and found his passion for medicine through the inspiration of his next door neighbor. "Growing up as a neighbor to a passionate radiologist, I developed a childhood interest in medicine," described Kurtz. Kurtz's future goals are to serve as a surgeon in an undetermined specialization.

The third and newest student working in the clinic is Mike Robinson. Robinson is originally from southern Georgia where he was born and raised. Following his completion of an associate degree in nursing he travelled to Montana describing the decision in the following way, "My love of the great outdoors led me to Montana, with its mountains, prairies and wide open spaces." Robinson hopes to complete medical school and go on to a career in psychiatry.