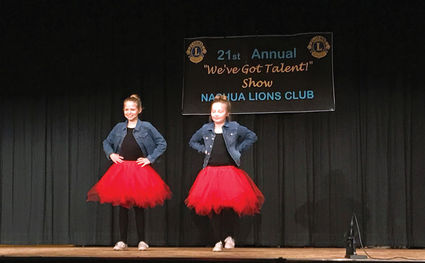 Tara Strommen / For The Courier

The Nashua Lions hosted their 21st annual Nashua Lions Talent Show on April 29. With 20 different entries, guests in attendance enjoyed musical performances including vocal, instrumental and clogging. The sound system was provided by Pippin DJ and Karaoke. Concecssions were also served with all proceeds benefiting the Lions Club to assist them with a variety of community projects including providing roller skating at the Civic Center in the winter, maintaining the Lions park, the Chirstmas shopping spree and the Nashua school clubs and fundraising projects, among others.

All participants were placed in three age groups: 10 and under, 11 to 16 years old, and 17 and over. Cash prizes were awarded to the top three places in each group. Memorial awards were also provided in honor of fellow Lion and Nashua community members.

The Garsjo Memorial Award was provided to Kimber Dulaney and Josie Kemp with their clogging performance. This memorial award is in honor of Hartvik and Agnes Garsjo, who always looked forward to the show every year because of the opportunity it gave to young singers, dancers, musicians and storytellers.

The Justin Baker Memorial Award was provided to Haidyn Raining Bird with a piano performance of "Perfect." This memorial award is in honor of Baker, who could always be found working as a stage hand at the talent show.

The Bob Robbins Memorial Award was provided to Codi Donniaquo. This memorial award is in honor of Robbins who was a member of the Nashua Lions Club for over 20 years. In December, he could always be found delivering items to the school for the Lions Club Children's Chirstmas Shopping spree.

The Brett Baker Memorial Award was provided to Priseis Berger & Kaleigha Laverdure with their vocal performance of "Blackbird." Baker was the music instructor for Nashua school and unexpectedly passed away in March.

The Nashua Lions thanks everyone for participating and states this talent show was one of the best ones they have ever had. Everyone who participated was a winner as it takes a lot of courage, hard work and generousity to enter the show.

The following were the results:

Second Place: Kinley Strommen with her piano and vocal performance

Third Place": Marlo Schulte and Gracyn Sibley with their vocal performance of "My Church"

First Place: Summer and McKenna Strommen with their vocal performance of "The Auctionner," a song originally recorded by their late great-uncle, Del Strommen

Second Place: Elizabeth Goettle with her vocal performance of "Arms"

Third Place: Myklynn Lewis singing "When I Was Your Man"

First Place: Dustin VanLoozen with his performance of "Colder Weather"