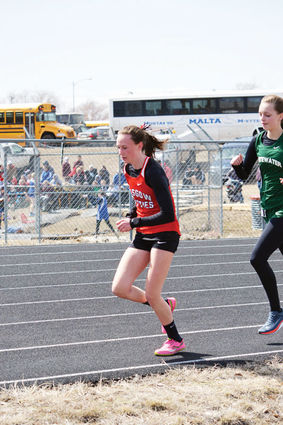 Brooke Westby competes in the Scottie Qualifier meet earlier this month. Westby ran to a first-place finish in the 3200m run at the Sidney Invitational held in Lambert April 21.

It's been a tough spring sports season for the Scottie track and field team. With weather and track conditions impacting most of Montana there have been limited opportunities to get consistent practices, and even fewer opportunities to compete.

On April 21, the team was on the road to Lambert for the Sidney Invitational. The meet was held in Lambert due to serious issues with the track complex in Sidney.

It is apparent that head coach Tim Phillips is frustrated with how the season is unfolding. "For me, it's just been so disappointing to get so few chances to see the kids compete this year," he stated. "Typically this is a peak meet for us. I like to have the first peak here, then Top 10, and then the post season. Well, we obviously had to throw out the whole schedule this spring, so I don't think we were quite ready to peak there."

Phillips was overall pleased with the performances in Lambert. "We had some very good performances," he explained. "The girls won the meet, and Baylie (Chappell) nearly qualified in the 100m against the wind. She topped some very tough competition, so that was an amazing run.

Emily (Kolstad) just missed the state qualifying mark by .18 in the 400, and both Keely Fossum and Ellie Page looked good in that race as well. Lauren Padden has battled injuries this spring, but her 800m was faster than I thought she was ready for."

"Brooke Westby ran very well in the 3200," he continued. "Ali competed well there too."

In field events, Phillips points out Riley Noser as a great addition to the throwers. The freshman placed second in the shot put at Glasgow's qualifier meet, and won the event in Lambert with a new personal record (p.r.). "Brennan Peters had a big throw in the discus to finish third," Phillips added, "and Katie Kaiser just missed qualifying in the vault for the second meet in a row."

Overall, Phillips said the boys didn't compete as well as he would have liked. "Tyler Fitzsimmons had a good 200m, and is staying healthy this year," he summarized. "Brett (Glaser) had a nice p.r. in the shot, and Ben Miller set a p.r. in the discus. Alec Boland had a big personal best in the javelin, and Matt Reyling went his highest ever, at 11 feet in the vault. Tyler and Jaysen Turner also made big gains in their distance in the long jump."

Phillips tried Ellis McKean in the 800m at the Lambert meet and felt he had a great race. "There isn't a ton of time between it and the 3200," he explained. "So it was a bit of an experiment to see how his body would be able to come back. He finished first in the 3200, but we didn't quite have the competition from other schools we thought we'd have."

Wilson Overby finished second in the same race followed by Merlin McKean in third. Overby performed well in the 1600 also, achieving a 7-second p.r. and a fourth-place finish.

Carl Zabrocki cut nearly 30 seconds off his 1600m time from the Scottie meet on April 16. "He was in the slower heat of the race on Saturday, and sat on the leader for three laps and then made a great move and looked really strong the rest of the way," said Phillips of the freshman runner.

Looking back on the April 16 meet held in Glasgow, Phillips felt the competition was more a lesson in overcoming the elements than it was performance. "It was good to get a meet in, but with winds never under 35 mph the entire time we were there, it didn't answer many questions for us," he explained. "I thought we competed okay, but need to learn a lot more on overcoming adversity."

According to Phillips, highlights from the earlier meet for the boys include Glaser winning the discus in his first ever competition in that event and Cody Cronmiller setting a big p.r. jumping against the wind. Additionally, Kyle Ross, Eli Zeluff and Skyler Saiz all had personal bests in the javelin.

Garrett Lloyd and Keevan Sibley are also showing some potential. "Garrett has shown speed and power that we haven't seen from him before, so we're excited about that, and Keevan did an admirable job anchoring the long relay for us," said Phillips.

Touching on the girls' performance in Glasgow, Phillips applauded Chappell's performances. "Baylie winning the 100 and 200 was good. She placed in the 100 as a sophomore, but we didn't see her last year as she battled a medical condition. She fought through another injury this winter. But she worked very hard on a sprinter workout routine in the meantime, and has come in as a vey explosive runner."

In field events, he noted that Tehya Campbell debuted with a second place finish in the javelin, with a great 104' 11 toss. "Hannah Mickelson also hit triple digits," he added. "To have two girls throw 100-plus on Monday was phenomenal."

The rescheduled Glasgow Invitational is Saturday, April 28. Field events start at 9 a.m., and running events at 9:30 a.m. According to Phillips, it's the last chance to qualify kids for the Top 10 Meet, which is Tuesday, May 1.

If anyone is interested in helping out with either or both meets, e-mail Phillips at [email protected] or text 406-263-1144.