Flooding Persists Across Valley County and the Hi-Line 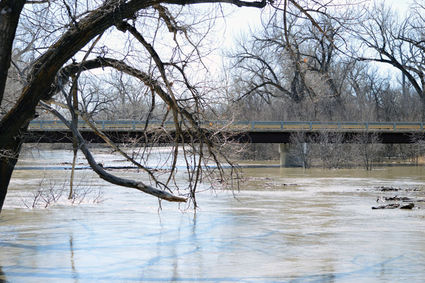 The Milk River nearly reaches the 6th Avenue Bridge just west of Glasgow on Saturday afternoon, April 21. Water levels are expected to rise to 29.8 feet on Monday April 30 in Glasgow.

After a summer filled with drought followed by a heavy winter, which brought record-snowfall, the next curveball Mother Nature has in store for residents of Valley County is flooding.

The flooding has been so worrisome throughout the state that Governor Bullock issued an executive order declaring a state of emergency on April 18. This executive order was issued for Valley County and other Hi-Line counties and authorizing the availability and utilization of necessary state government services, equipment and supplies. Bullock also established a Multi-Agency Coordinating Group in order to stay informed of the flooding situation statewide.

Even with the nice spring weather and no precipitation, flood warnings continue along the Milk River at Tampico, Glasgow and Nashua, as well as Dodson, Malta and Saco in Phillips County. Meteorologist Alan Hickford with the Glasgow National Weather Service stated the Milk River in Glasgow is expected to reach moderate flood stage at 29.8 feet by Monday, April 30. Nashua is expected to reach minor flood stage at 20 feet within the next couple of days, reaching crest by April 30. Hickford commented on the many factors that determines when and how the river will rise, including how much water there is upstream, how much snow melt there is, which according to Hickford isn't that much anymore, and how much overflow the creek waters have.

With the rising of the waters, Disaster Emergency Services closed Tampico Road, north from Tampico Road to Riverside Dr. and Canal Road from Bentonite to Brazil Creek Road due to flooding. They also stated Bentonite Road and Maag Road have washout conditions. Beil Road is closed, Shady Lane is closed, Vandalia Road is closed and water is off the road at Edwards Road at press time. DES has advised the public to use caution while traveling.

When encountering flood waters during travel, turn around and don't drown. Most flood deaths occur in vehicles as it's difficult to determine how deep the water actually is from within the vehicle and then it can be difficult to escape the vehicle once it is washed downstream.