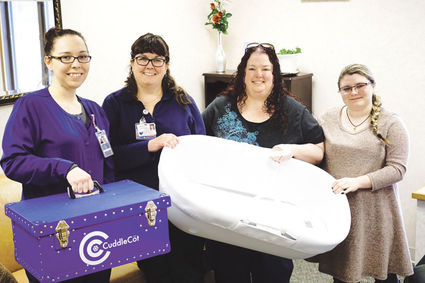 In order from left to right, nurses Kayla Lawrence and Brandi Knierim receive a Cuddle Cot as a donation to FMDH from Susan and Caleigh Green of Malta.

Malta resident Susan Green knows first hand what it is like to lose a baby early on. She lost one of her twins in utero over 17 years ago. She said she had also known people and friends who had experienced the loss of a newborn or young infant. Because of those experiences, she recognized a need at the two local hospitals in her hometown, and sought to provide what is known as a Cuddle Cot.

According to Brandi Knierim, a registered nurse at Frances Mahon Deaconess Hospital, the idea behind a Cuddle Cot is simple. It takes out the need to remove the baby from the parents presence at all and allow them to grieve uninterrupted by hospital staff.

"It gives us the ability to give them space," explained Kayla Lawrence, also a nurse at FMDH. The two nurses were reverently excited to receive such a donation. "We hope we never have to use it," said Knierim, "but the chances are we will eventually need it."

Before the Cuddle Cot, if a family experienced the loss of a newborn, young infant or a late-term pregnancy, the baby would be left in the room with the parents for a given amount of time. After that time has passed, the child would then need to be taken, chilled, and then returned to the family. The reason being that it is necessary to prevent the rapid deterioration of the body. The baby would undergo this cycle throughout the entire period of time the family grieves the loss. According to Knierim it can become a little intrusive for nursing staff.

After realizing the need recently, and performing some research, Green obtained the price and the company to order the cots from, setting out to raise the $6,000 necessary to order cots for both Glasgow and Havre (Philips County does not have a maternity ward). Green, along with her surviving twin daughter, Caleigh Green, raised the money by selling "pearls for precious angels" charms that had either been turned into necklaces or bracelets.

The duo were able to order the first cot back in December, but due to corresponding with a company in England, the shipping required more time than anticipated, and the cot was delivered on April 2.