By Marc Kloker
FWP - For the Courier 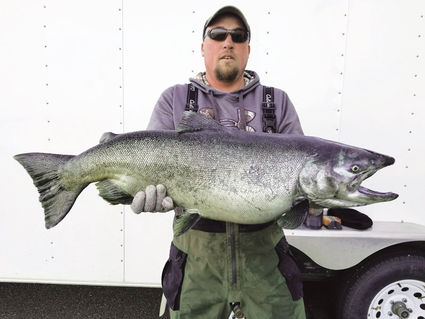 Montana Fish, Wildlife and Parks fisheries crews began collecting adult Chinook salmon the first week of October this year in hopes of collecting a large number of eggs. Throughout October, FWP staff collected an estimated 791,000 eggs from nearly 200 female salmon. Although this was down from the record year of 1.4 million in 2016, this was the second most eggs collected since the program began. Successfully hatched eggs will be raised to fingerlings and released back into the reservoir in 2018.

Crews used electrofishing boats and targeted areas near the dam throughout October. Salmon do not naturally reproduce in Fort Peck Reservoir, making these efforts critical to the continuation of this fishery.

Salmon were first introduced into Fort Peck Reservoir in 1983. Due to the abundance of their preferred forage fish, cisco, salmon have shown excellent growth, with males maturing in two to four years and females in three to four years.

Although less salmon were caught by anglers in 2017, crews were hoping for a good egg-collection year because those fish that were caught were bigger in size.

"There were definitely fewer salmon present in 2017 when compared to last year, but the large year class(es) of cisco present likely also influenced the bite," said Headley. "A large portion of females captured this year during the spawn collection were likely four-year-old fish and in very good condition."

Reports from anglers as well as observations during netting surveys indicated most game fish species in Fort Peck, including salmon, were utilizing the abundant year class of small cisco.

The size of most females captured was close to 20 pounds. The largest female measured was 35.8 inches and weighted in at 26.7 pounds.

The presence of these older, larger fish allowed staff to collect a larger number of eggs from fewer fish.

"Eggs-per-female averaged around 4,000 this year, compared to past years when the average was closer to 3,000 to 3,500 eggs per female," said Wade Geraets, the Fort Peck Multi-Species Fish Hatchery manager. "Egg size was also larger in 2017 compared to most years, and in some instances, larger eggs may have a better hatching success and survival as well."

"We are hoping for good hatching success and rearing over the winter, and look forward to putting more salmon back in the reservoir next spring," said Geraets.