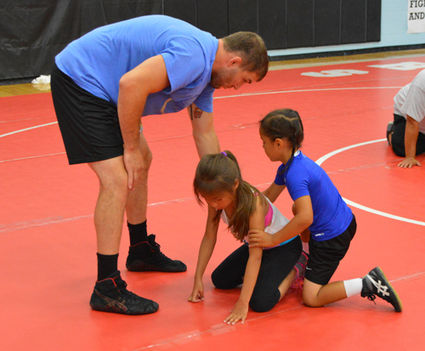 Ty Vinson (left) gives instruction to Tori Dimas of Poplar (center) and Bryce Evan of Frazer (right) during the wrestling camp held in Frazer July 18 and 19.

It's hard to say who was more excited for the first-ever wrestling camp held in Frazer. The campers seemed to be wound up just because they were having fun. The coaches more so because they were witnessing history. "This is the first time these gym floors have ever been covered in wrestling mats," explained Frazer's head wrestling coach Buck Turcotte. "Dean Blount has been here for 40 years and he said he's never seen it."

The camp was held July 18 and 19, and featured members of the Eastern Oregon University's (EOU) coaching staff, Dustyn Azure and Ty Vinson.

Azure is entering his second season as EOU's head men's and women's wrestling coach, and has been involved in coaching at both the high school and collegiate levels.

Originally from Poplar, Azure spent time in Ronan as the high school's head wrestling coach, and at MSU-Northern as an assistant coach. During his time in Ronan, he produced five state champions and one academic All-American.

Some of Azure's achievements include NAIA All-American honors as a wrestler for MSU-Northern's Lights, and recognition as NWCA Montana Head Coach of the Year in 2010-2011.

Vinson graduated from Oregon State University (OSU) where he wrestled for five years and served as the team captain. Following his graduation, he joined the coaching staff at the University of Great Falls and spent three years there as an assistant coach. He joined the EOU wrestling staff in 2016.

Turcotte said the turnout for the two-day camp was great, with 45 campers registered. "We had wrestlers from Havre, Chinook, Fort Benton, Harlem, Glasgow, Wolf Point, Poplar and Sidney," he said.

Turcotte also noted that he's had a lot of support from Brady Flaten, Jory Casterline and several coaches and parents from Glasgow. "Tip of the hat to the Scotties," he said. "They brought down a big group of wrestlers and even loaned us a wrestling mat to use for the camp."

When asked what Frazer is going to do with all the little kids that are excited about wrestling now, Turcotte said they are looking into starting an AAU program. "With my teaching and coaching responsibilities, I personally don't have the time to take it on," he said, "but we do have a few parents that have been pretty involved and I think they might step up. We are also adding a wrestling program at the junior high level."

It is apparent that Turcotte is excited about the interest and participation in Frazer's newest high school sport, and if potential success can be predicted by the level of enthusiasm for a program, Bearcub wrestling will blossom in the years to come.