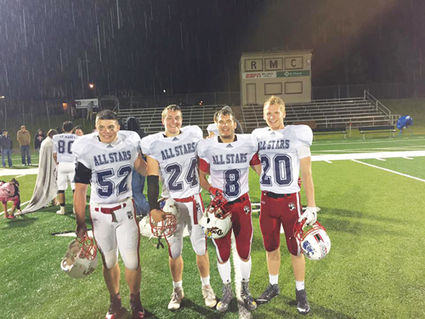 Representing the Scotties at the 2017 Montana Class B All Star football game were (pictured l-r): Grant Morken, Benji Phillips, Trent Herbert and Luke Breigenzer. The boys represented Glasgow well as they contributed to the Northern team's 59-20 win over the team from the southern part of the state. Also representing the North from our area were Wesley Weeks, Ty Nygard and Saunder St. Marks of Wolf Point, and Reece Hutton of Harlem. The head coach for the North was Peter Hamilton of Cut Bank with Josh McCrossin, Glasgow; Scott Mycke, Conrad; Kellen Alger, Cut Bank; and Chad Dunn, Eureka assisting. The game was played on the Rocky Mountain College campus on June 9, and announced on KLTZ by Tim Phillips.