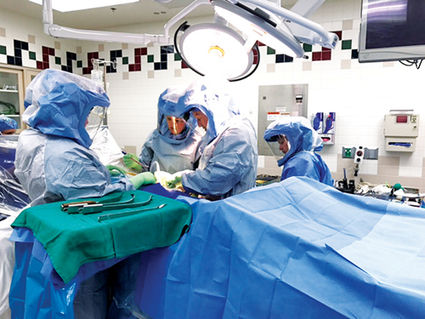 Jill Meiers / For The Courier

When we sat down with Dr. Scott Croft at his new office in Frances Mahon Deaconess Hospital, he was excited to skip talking about himself and move on to talking about the advances the orthopedic surgery department at FMDH was making.

"We are doing surgeries that have never been done before at FMDH," explained Croft before telling the Courier that the hospital had taken on the task of updating the operating room table in order to accommodate the new operations.

The second of the new operations described was the reverse total shoulder replacement. Croft explained the procedure was performed in older patients near or in their 70s. The doctor takes and reverses the joint of the shoulder, placing the socket where the ball joint is and the ball joint where the socket is. Croft described the procedure in detail, telling how the reversed joint allowed the deltoid muscle to lift the arm completely, returning almost the entire full range of motion to the patient. Croft described the reverse total shoulder replacement as, "the best new technology which has improved patient outcomes more than any other new development in my career."

It was evident Croft hit the ground running. Having started surgeries in April, he was uncertain the total number he had completed since arriving. He estimated the number was likely more than 40, choosing to go with "dozens" of surgeries.

Croft's background is befitting of the area. When asked why he chose to move to Glasgow he said, "pheasant, family and fishing." He hopes the accommodations provided by FMDH will allow him to spend time with the family he left in Colorado.

The fourth generation doctor from Lovell, Wyo., hails from a long line of medical or dental doctors; Dr. Croft's great-grandfather and grandfather were both frontier doctors in the frontier town, with his father serving as a dentist. Croft took on Brigham Young University for his undergraduate, and Georgetown University for his medical training. After receiving a US Army Medical Scholarship, he was commissioned as an officer in the Army. After completing residency in orthopedic surgery at the Presidio of San Francisco, Calif., and UC Davis, he served a tour of duty in Germany. Leaving the Army behind, he opened a private practice in Scottsdale, Ariz., and then moved back to Wyoming seven years ago, before taking up his current post at FMDH.