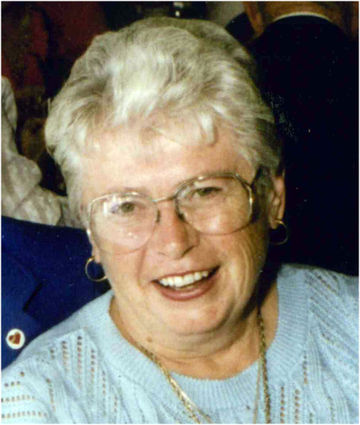 In the early morning hours of Tuesday, Feb. 7, 2017, the clouds parted above the plains of eastern Montana and golden moonlight bathed an abandoned sod-roofed homesteader's cabin. For just a brief moment the winds stopped and the prairie stilled to listen to a young girl's laughter from long, long ago. In the quiet of a winter night, a Montana prairie girl had returned home.

A memorial service for Elizabeth "Betty" (Watson) Drummond, 89, will be held at the Bozeman United Methodist Church on Monday, Feb. 27, at 11 a.m.

She was born in Hinsdale, Mont., on Feb. 14, 1927, to Irish homesteaders David and Mary Watson. She grew up on the family farm in Vandalia, and attended grade school in the one-room Vandalia schoolhouse. She graduated from Glasgow High School in 1945, just as World War II was ending.

Her early days were spent tending the family's livestock, helping with farming chores, and driving grain truck each harvest season. In the 1970s, she wrote about growing up as the daughter of homesteaders. "Homesteaders were among the people of courage who found strength to leave the familiar to find a place in the unknown. We needed courage to face each day as the sun came up, courage to try a new way, courage to dream of the things desired . . . a family, a home, to own our own land, to work hard to prepare for the future. And courage to set high standards for ourselves and for posterity."

In her writings, she reflected on the years of drought, of wind-driven dust storms, and wearing shoe insoles cut from cardboard to cover large holes in the soles of worn-out shoes. She said, "We always found ways to do whatever was required to make the most of each day, with love, and for love."

It was also while attending MSU that she fell deeply in love with a former army bomber pilot, James Drummond. That love affair continued for 67 years until his death in 2016. She graduated from MSC with a degree in Home Economics in 1949.

Following graduation, she and Jim were married in Glasgow, in September 1949. They moved to Wyoming for a year while Jim completed his graduate degree at the University of Wyoming, then returned to Bozeman where he became a professor of Animal Science at MSC.

As Jim began his professional career, she embarked on her own career as the mother of sons, Jim, Bill and Bob, as well as involvement and leadership in many community organizations. She immersed herself in the school PTAs, Camp Fire Girls leadership, Rainbow Girls advisor, the Methodist Church Board, the Bozeman Hospital Board of Directors, 4-H leader and judge, PEO, Extension Homemakers Club, Montana's Bicentennial Committee and advisor to MSU sorority groups. She was a Cub Scout leader and eventually became a trainer for local Cub Scout and Boy Scout leaders. She was especially involved in the Order of Eastern Star, where she served as Worthy Matron for the Lilly of the Valley Chapter, and eventually served as Grand Worthy Matron for the State of Montana. She was recognized with the Bozeman Outstanding Community Service Award in 1973.

As she approached the sunset of her life, her greatest joy came from the time spent with her family, and especially her grandchildren. Whether attending every snowy soccer game, or roasting marshmallows over a fire, or giving gardening lessons, or just reading a book out loud, she gave her boundless energy and every bit of her heart to her husband, her children and her grandchildren. She was a Montana born woman who believed in hard work, honesty, her civic duty, and love of all those who surrounded her.

On the night of her passing, she said to her grandson, who was tucking her into bed, "I hope Grandpa will come tonight to take me home." As it happened, Grandpa did come to visit on that quiet winter night. And hand in hand, and with a love that will never end, together, they both went home.

She was preceded in death by her husband, Jim; her parents; two brothers, her twin, George, and Jim (who was a casualty of World War II); and one sister, Edith.

A public viewing was held at Dokken Nelson Funeral home in Bozeman from 10 a.m. until noon on Saturday, Feb. 11, followed by a private family interment.

Arrangements are in the care of Dokken-Nelson Funeral Service of Bozeman. http://www.dokkennelson.com.