By James Walling and Ginevra Kirkland
The Courier

A Salute to Saco 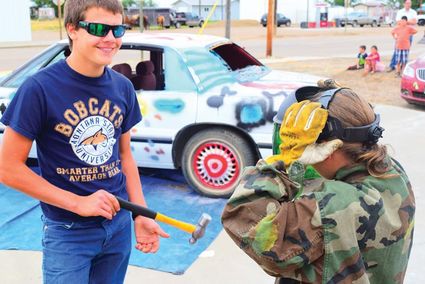 Cordell Younkin assists Berkley Hillman in Saco on Sept. 3 as she prepares to lay waste to a wrecked car for a small fee. The game was part of a fundraiser for band equipment and other supplies. To pitch in a few dollars of your own, write to [email protected]

There was a lot of talk about the past at this year's Saco Fun Days. Former county commissioner Dave Pippin took us on an impromptu Fun Days tour after the parade on Sept. 3, pointing out properties owned by relations past and present. He detailed historic happenings from previous gatherings, including staged robberies, horse races and festivities that carried into the wee small hours.

He wasn't the only one with a bit of nostalgia on the brain. Amid the revelers at the well-attended parade along Hwy 2, there were grumblings about the decline of the local event. "It used to be better" is a quote that could be attributed to at least three different Fun Days attendees we spoke to. Others, like Sid Simonsen and his sister Jean, seemed content to help themselves to the excellent food on offer and the pleasant company all around.

For our part, your Courier correspondents were touched by the present. Compared to 2015, which was also a treat, this year's event seemed better attended and more energetic. Along with the usual suspects, Zora and Linden Holt of Hinsdale were out again with their wagon, dressed in period garb and sporting anti-Bison signage. The only differences that we could detect were bigger smiles on both of their faces. Here's to another good showing next year!