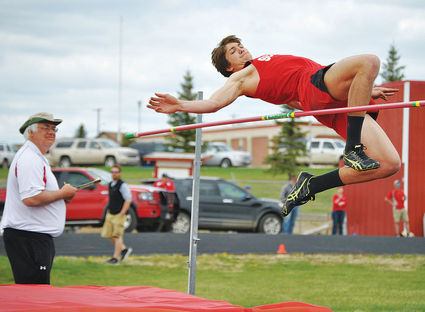 Chase Fossum soars over the bar during an attempt in the high jump event. Fossum won the event with a mark of 6 feet.

Glasgow Track and Field blew past the competition in the 2B District track meet held at Glasgow last weekend as the Scotties won both the boys and girls titles.

"I can't say enough about how hard these kids have worked the entire season," said Glasgow Head Coach John LaBonty. "We had a number of kids advance to Divisionals and if we can get the same performance from them there, we'll have a lot of them going on to State."

The Scottie girls took first place with a score of 237. Second place Malta finished 120 points behind Glasgow with 117.

On the boys side, Glasgow racked up an astounding 295 points to claim their title. No other team crossed the 100 point barrier on the day as Poplar finished in second with 64 points.

Assistant track coach Wade Nelson said that the performance from the Scotties at Districts was something he never remembers seeing before.

"I think overall we had a great day," Nelson said. "Point wise Glasgow probably scored more points than anybody in the district has ever scored."

Overseeing the athletes who participate in the throwing events, Nelson said that his main goal was to get three qualifiers from each event to advance to Divisionals. Although he wasn't quite able to see that goal be accomplished, Nelson was able to get three of his athletes in boys javelin to move on.

"I went one, two, three in the javelin which is great," Nelson said. " We [the coaches] never thought Benji Phillips, our freshman, would win it."

Nelson said the performance by Phillips is good, not only for Phillips, but the program down the road as well.

Phillips said that he went into the Districts with a calm approach and just tried to do his best.

"I came in hoping to get a few personal records and tried to run well although it's not my best event," Phillips said. "I ended up getting a 19 foot personal record in javelin so that's good for me."

Phillips recorded a mark of 163-03 in the javelin which was four feet better than Glasgow's Jason Thibault who finished second with 159-01 and Lane Herbert who finished third with 157-07.

Even after beating Thibault and Herbert, Phillips was quick to point out that his teammates have much more experience in javelin than he does.

"They're a lot more experienced in the javelin and I think they're going to get up to the top hopefully in Divisionals and State," said Phillips.

In the girls high jump, Megan Dailey continued to flirt with a new personal record. Dailey hit the mark at 5-03 on the high jump which tied her current personal record she set earlier in the season.

"I was pretty confident going into the Districts heading into my all events," Dailey said. "My high jump went awesome and our short relay [400 relay] got a huge personal record that we've been looking forward too all season."

Dailey will be competing in numerous events at Divisionals including the high jump and 400 relay.

Another Scottie to watch out for is junior Dana Hughes. Hughes advanced to Divisionals in each of her events, javelin, discus and shot put. In order to take first in all of them, Hughes said she won't necessarily change her approach for any of the events, but did acknowledge that she would have to do exceptionally well in the discus to win first place.

"I'd have to set a new personal record in discus to get first in Divisionals," Hughes said.

Divisionals will take place this Saturday at Great Falls.