Getting Our Kicks On Route 66 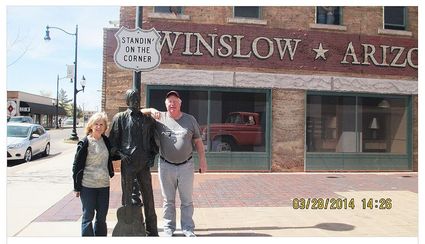 Standing on a corner in Winslow, Arizona, it was such a fine site to see for Donna and Dave Kloker.

My husband, Dave, came up with an original idea to celebrate my age of 66. "Let's travel Route 66 and get our Kicks."

So off we went, leaving Park Grove on March 18 to start an unknown adventure of sorts. With Triple AAA books and maps and our book called "Traveling Route 66 2250 Miles of Motoring History from Chicago to LA," we were headed on our way to find the Mother Road.

We started each day by listening to songs of the Mother Road on our CD. Of course we had to get to Illinois, which is no small feat. However, we enjoyed spending time on the way by staying in Medora, N.D., seeing relatives in several South Dakota towns and spending a night in Iowa.

Soon we hit our starting point in Illinois, and now were on our way. We followed the route as much as we could but the original is now replaced by interstates 55, 44 and 40.

I will attempt to share some of the highlights of our trip even though they are many too numerous to mention! In Springfield, Illinois, we enjoyed seeing the former home and final resting place of President Lincoln. We tried to pick up of as many of the famous mentioned sights along the way. While traveling through somewhat smaller ghost towns, we were amazed at the number of abandoned gas stations, motels and cafes that no longer exist due to the interstate bypassing those towns. Some of those side roads on our route would have dead ends, and we would have to back track to where we had been.

In St. Louis we saw the arch, but due to crazy traffic we didn't stop. We toured several museums that were very interesting with Route 66 memories. One Missouri rest area was modeled after Route 66 businesses. A 66 Drive-in outside of Carthage, Mo., is still in operation. We crossed into Kansas and then to Tulsa, Okla., where we had a new experience with a toll highway and enjoyed eating at Toby Keith's restaurant.

Amarillo, Texas, is famous for The Big Texan Steak Ranch, where we stayed and ate. We watched a fellow tourist try to eat the 72 oz. steak with all of the trimmings. If you eat it in less than an hour, it is free. Otherwise, the cost is $72.00. He didn't get it free!

A windy, dusty day that you picture for Texas took us to see the Cadillac Ranch, where 10 Cadillacs are buried with their tailfins sticking up. You can even bring you own spray can and add your own graffiti and color to the cars. A midpoint for the trip is noted in Adrian, Texas as 1,239 miles.

We were in Albuquerque, N.M., one night and then visited in Gallup, N.M., the beautiful El Rancho Hotel, which played host to many movie stars, especially back in the 1940s. We spent time in Arizona with family and were glad to have warmer weather, finally. Most days were windy and cool prior to that and after that.

Arizona has many smaller tourist type towns to enjoy – such as "standing on the corner in Winslow, Arizona" and Williams in the Grand Canyon area. Seligman is where the person who started the rebirth of Route 66 still operates a barber shop, and the town has a famous Road Kill Café. Joseph City is known for its Jack Rabbit Trading Post, and its advertisement sign that has a Jack Rabbit pictured and says, "Here It Is!" We traveled on a windy, hairpin road to Oatman, where wild donkeys walk the streets along with the tourists. Feeding them (the donkeys!) is encouraged.

Needles, Calif., hit us with our high gas of $4.79. To our surprise, our motels averaged about $65 a night, and we stayed in some very nice places. We ended our Route 66 part of the trip in San Bernadino, and then went to northern California to visit family in the San Francisco area. Our travels then took us to Reno, Nev., Twin Falls, Idaho, and back to Montana.

Some 6,026 miles later, we were thankful we were at our Home Sweet Home on April 9. We did get our "kicks," and although most of the original Route 66 is gone, the ghosts and memories still linger in the hearts of many.