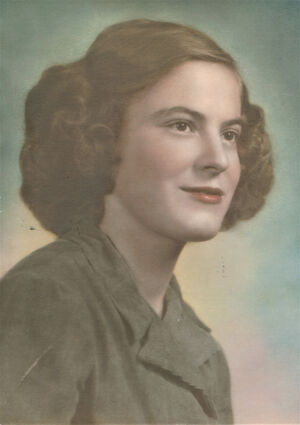 Cremation has taken place, and the family will hold a celebration of life at a later date.

Mavis was born on Sept. 6, 1931, in Opheim, Mont., to Clarence and Bernice (Stowell) Keough, the second of 11 children. Mavis grew up roller skating and helping on the family farm in Opheim. She was so skilled on the farm that her mother would often send her out to help fix the equipment when her brothers and father struggled with it.

She graduated high school from Opheim in 1950. Following high school, Mavis worked at Buttrey's in Glasgow, Mont., as a bookkeeper. It was there she met her future husband of 59 years, Arnold Robbins. Mavis and Arnold were married on Nov. 26, 1952, and remained married until his death on March 21, 2012. Together they had six children and lived in Glasgow, Nashua, and Havre, Mont., throughout the years.

Mavis was a devout member of the Church of Christ and one of her favorite pastimes was listening to "In Search of the Lord's Way" on TV. She carried her faith with her throughout her life and shared it with her loved ones. Mavis gave birth to her first son, Emmett "Buck," and he was soon followed by daughter Mavis "Micky," and then Craig "Rick," Victoria "Vicky," Linda, and Merritt. Mavis was blessed through her children with 16 grandchildren and 25 great-grandchildren. She loved being a grandmother and was always available for a game of cards or dominos, although she did tend to get feisty if the game of dominos got competitive.

In addition to being a devoted mother of six, Mavis also pursued many professional paths throughout her life. She worked as an assembly line worker at the Air Force Base in Glasgow, a bookkeeper at Eaves Equipment (Weaver Maxwell), and most recently worked at the Hill County Road Department where she retired in the 1980s.

She was preceded in death by her husband, Arnold Robbins; son Craig "Rick" Robbins; four brothers; three sisters; and her parents.

Mavis' family has suggested memorial donations be made in her memory to the charity of the donor's choice.

Holland & Bonine Funeral Home has been entrusted with arrangements.

Please visit Mavis' online memorial page to send a card or leave a message of condolence for her family at http://www.hollandbonine.com