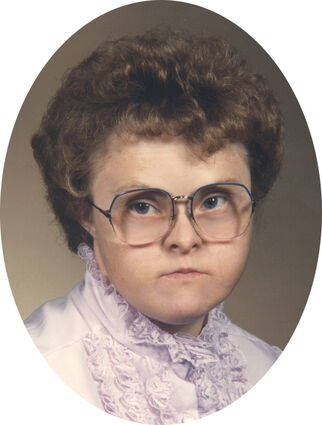 With deepest sorrows, we announce Diane, age 66, passed in the evening of Sunday, Nov. 27, 2022, at Billings Clinic, in Billings, Mont.

Funeral services for Diane will be 11 a.m., Thursday, Dec. 8, at Our Redeemer Lutheran Church in Nashua, Mont., with Pastor Bonnie Novak officiating. Burial will follow at the Nashua Cemetery.

Diane Marie Ersland was born with Down's Syndrome on May 29, 1956, to Levi and Shirley (Kuecks) Ersland. Dr. Phil Smith told Shirley to take her home and love her, and treat her like any other "normal" kid. Diane was best known for her generous hugs.

The first years of Diane's life was spent with her parents on their farm in the Ossette Community. While on the farm, she enjoyed checking cows with her dad and riding her bike.

When Diane was old enough to start school, there were no special education classes in the area, so a group of parents gathered their children together in one of the rooms at the Lutheran Church in Glasgow, called the Opportunity Room. During the week, Diane stayed with Shirley's parents in Nashua. While staying there, Grandpa would play his "jungle music" on his guitar and Diane would dance.

When Eastmont opened in Glendive, Mont., the Erslands decided to send Diane because they felt it offered her better educational opportunities. She started at Eastmont in January 1970. She participated in the five-day program and came home on the weekends with the help of friends and carpooling. In October of 1970, Diane and her family moved to Nashua so Diane could attend special education classes that had just begun in Nashua. Diane attended Nashua until 1979. Diane loved going to basketball games to support the Nashua Porkies.

She began day services at the Milk River Activity Center in 1979. She worked mainly in the laundry area. Her daily routine with her brother at the Center was to walk to "Markle Hanks" to get her a pop. Whether at home, or at the Center, Diane spent much of her free time coloring and doing paperwork. In 2019, she moved into Warren Group Home to live with her friends of Milk River.

Diane participated in Special Olympics and has many medals to show for it. Diane was a member of Our Redeemer Lutheran Church in Nashua and the American Legion Auxiliary Nashua Unit 104. She enjoyed many vacations with her parents and brother, Matthew. She attended Griz games with her Aunt Nordy.

Diane was preceded in death by her sister Marcie; her brother Matthew; grandparents Nels and Borghild Ersland and Henry and Sarah "Sally" Kuecks; cousins Rodney Greenwood, Jake Fuglie, Jason and Brad Riley, Steven Langseth and several other family members. Each family member will be met with the best hug ever.

The family asks that in lieu of flowers please give to Milk River Inc. or the charity of your choice.