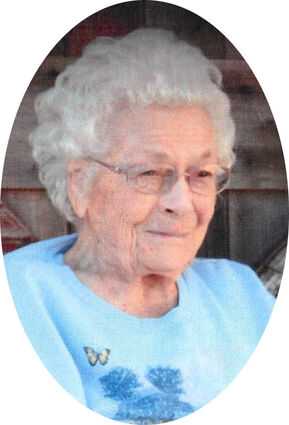 Pat was born in Lurgen, Ireland, Jan. 23, 1925, to Bill and Janet (Cluff) Taylor. The family was lured from Ireland in 1929 to make a new life in Canada along with 40 other families from England, Ireland and Wales to establish a CPR Colony South of Rockglen, Saskatchewan, Canada. The families' arrival coincided with the beginning of the dirty 30's! She attended Willowdale School. In 1947, her dad suddenly died, leaving her mother and the girls to manage the farm. Pat is one of the last survivors of the colony. She was always proud of her Irish heritage!

On May 20, 1949, she married Don Risa. The couple made their home eight miles northeast of Opheim, where they farmed and ranched their entire lives. On their first anniversary their son, Wayne, was born and Billy followed a year later. Wayne was tragically killed in a car accident in 1973. Billy continued to farm and ranch with his parents.

Don and Pat moved to Nemont Manor in October 2012. Don passed in 2014 and Pat continued to live there until April of 2017 when she had hip surgery, she then moved to Valley View Home. Pat loved living at Valley View and she referred to it as her home and the staff as her family.

Pat loved company and loved baking. She always had goodies to serve up with tea or coffee. She also enjoyed playing cards, especially if she was the winner! She always had a beautiful flower garden at the farm!

Preceding her in death are her husband, Don; parents Bill and Janet Taylor; sisters Cynthia Mulvanea (2014) and Morlene Nelson – Zimmer (1996); and son Wayne.

She is survived by her son and daughter-in-law, Billy and Jeanette on the family farm near Opheim; step-grandchildren Chad, Becky, Jaedon, Dylan and Brooklyn Philipi, of Billings, Mont .; brother-in-law Theron Risa, of Glasgow; and numerous nieces and nephews including Leary Mulvanea and Kathy Snyder, of Saskatchewan.

Pat's family requests that in lieu of flowers to please donate to the charity of your choice in Pat's honor.