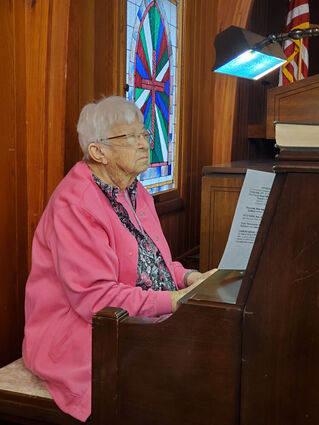 Funeral services will be held 2 p.m., Friday, Nov. 18, at Our Redeemer Lutheran Church in Nashua with Pastor Bonnie Novak officiating. She will be laid to rest by her husband in the Nashua Cemetery.

She graduated for Wolf Point High School in 1946 and then went to Concordia College that fall, graduating in 1950. Helen started working at the farmers union in the Education Department. Then she met Fred Amestoy and they were married in 1953.

Helen and the family moved to Missoula, Mont., where she started teaching kindergarten in our church, Atonement Lutheran. She taught there for six years. Then prior to the divorce she signed a contract to teach second grade in Nashua. So she moved her family to this little town, which Lyndon was most unhappy as his name appeared on the concert choir list the day she signed the contract. Heather didn't mind because she thought that Helen had said Nashville and so she thought country singers and movie stars, which she is still looking for.

Helen joined Our Redeemer Lutheran Church and took part in the choir and teaching Sunday School.

In Nashua she met bachelor janitor, Robert Robbins, and they got married April 1971. Robert with 30 years as a janitor and Helen with 20 years of teaching, they retired and started helping more with Grama Alma. She would go back to the second grade to teach a bird unit and then she would teach calligraphy to the art class.

She joined the Valley View board for about five years. She joined the senior citizens and made the choke cherry syrup for the pancake suppers that they would have at the ball games.

Helen loved sewing: she would make jean quilts for all of her family and friends. At the end of every summer the kids would arrive home with clothes that grama made from the material the kids would pick out. She would do all of our mending, we would bring whatever and she would fix it like it was new. She would do the cutting of the squares or strips for the ladies at the churches quilting club. They would use those pieces to make the piano key quilts for the seniors at the school. She would help with Indian Taco Nights, cutting up the tomatoes that would be used. She played the piano for church and she would laugh and say, "Did you hear all the mistakes?" and they would all say they didn't hear a thing.

Helen loved her little community here in Nashua and all the people in it. She will be missed by all.

Memorials can be made to Our Redeemer Lutheran Church in Nashua.