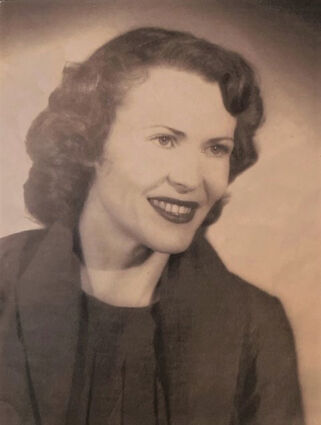 Fern was born on Sept. 24, 1927, in Cottonwood to Oscar and Marie (Verploegen) Thompson. She was raised in the Cottonwood community, attending St. Jude Catholic School, and graduating from Havre High School, in Havre, Mont., in 1946. Fern attended the Pratt School of Design in New York, and in 1948 took the McConnel Airline Stewardess Course, which culminated in her working for TWA as a stewardess. In 1949, Fern married John S. Vosen, and in 1961 the couple made their home in Glasgow, Mont., where they raised their eight children. There, Fern helped support her family as an artist, worked for AVCO at the Glasgow Air Force Base, and as a saleswoman with Kirby Vacuum, World Book Encyclopedia, Avon, Melaleuca, Tupperware, Royal Neighbors Insurance, Shaklee, Bosh and Magic Mill, Distillers. She moved to Kalispell in 2019 to live with her sons Mark and Mike.

Fern was an adventuresome, loving, and fiercely devoted wife and mother. She imbued her children with creativity and was passionate about her artwork, painting, sculpting, sewing, rug-making, bleeding turnips, creating something from nothing, rock and buffalo bone hunting, gardening, and interior decorating, and she absolutely loved dancing. Fern rode horseback in the 1989 MT Centennial Cattle Drive, and at the age of 79 rode horseback for 94 miles through the Bob Marshall Wilderness. She was a member of St. Raphael Catholic Church and Altar Society and the Royal Neighbors of America.

She was preceded in death by her husband, John "Jack" Vosen; and parents, Oscar Thompson and Marie Thompson VanderVen.

Holland & Bonine Funeral Home has been entrusted with services and arrangements. Please visit Fern's online memorial page to send a card or leave a message of condolence for her family at http://www.hollandbonine.com.