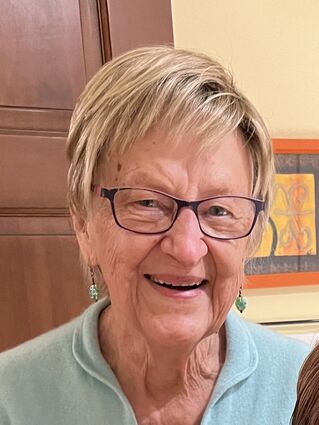 A celebration of Carol's life will be held at a later date.

Carol was born in Tampico, Mont., to Agnes (Stensland) and Chris Molvig Feb. 16, 1935. She was the second oldest of eight Molvig children. She was baptized in the First Lutheran Church in Glasgow, Mont. While growing up in Glasgow, Carol was active in 4-H and Farmers Union. She graduated from Tampico Grade School in 1948 and from Glasgow High School in 1952. She then attended college at Montana State and graduated with a degree in nursing. She was a member of the Alpha Omicron Pi Sorority.

Carol married John Kreer in San Francisco, Calif., Dec. 30, 1967. They spent many years together raising their two children, Christian and Erica. Carol worked for the University of San Francisco Hospital and retired as the Director of Nursing after a 30-year career.

Carol was a great cook and baker, enjoyed traveling, and was a Giants' baseball fan. She enjoyed spending time with her children, and her grandchildren, as well as family visits back to her Montana roots.

Carol was preceded in death by her husband, John, in 2002.

She is survived by her children and their families, Christian (Kina) Kreer and their children, Jonas and Alec; and Erica (Matt) Schrey and their children John and David. She is survived by her sisters and their families: Dorothy Kolstad, Alyce (Lee) Tracy, Donna (John) Whittle; and her brothers Robert, Charles (Coni), Kenneth (Jean) and Richard (Alison) Molvig. Also surviving her are many nieces and nephews and her extended Kirkland, Nelson, and Flesjer cousins.

The family asks that memorials be made to the Valley County Historical Society or the charity of one's choice.