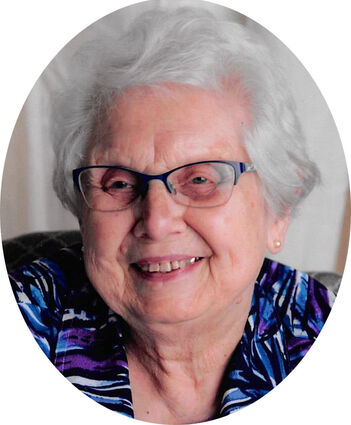 Donna Mae Tihista, 89, the daughter of Ingvald and Magda (Hartvikson) Leraas, was born May 2, 1933, in Knox, N.D. At the age of one and half she traveled with her parents to their new home 26 miles north of Nashua, Mont. She graduated from Nashua High School in 1951 and immediately began working in Glasgow, Mont. She soon gained employment as a secretary at Bjorklund Insurance Agency where she worked for the next three years until her marriage to Jed Tihista on Oct. 10, 1954. Together they ranched, farmed and raised their three children: Corinne, Doug and Duane, on the Wiota River Bottom east of Nashua.

Donna's kitchen was truly the hub of her home. Everyone was always welcome for a meal or just to sit and visit over a glass of tea and cookies. There was no place she would rather see her family and friends gather, than at her table, loudly laughing and enjoying each other.

Donna cooked and cleaned and could do everything in between. In addition to genealogy, some of her hobbies included gardening, canning, baking, quilting and crocheting. She crocheted afghans for each of her children, grandchildren and even extended family members. She was an excellent seamstress and cook and will be fondly remembered for her chocolate chip cookies, popcorn balls and peanut brittle that she freely shared with friends and neighbors.

Donna was a generous community volunteer. She was an active member of Our Redeemer Lutheran Church in Nashua where she held many roles throughout the years. She was treasurer for the church and also for the women's group, as well as volunteering to teach Sunday school and Vacation Bible School. She served on the Luke's 100 Board, Valley View Foundation Board and the Prairie Church Foundation. She was on the election board for nearly 30 years, serving as chairman of the board for four years. She served on the supervising committee of the Nashua Federal Credit Union for 10 years then became involved with the Glasgow Credit Union until its closing. She was also active with the Nashua All-School Reunions and was committee member for many, many years. Her passion of genealogy led to her association in founding The Root Digger Club, where she again served as treasurer. She compiled and published a Hartvickson Family history book, created an extensive Tihista genealogical chart, and spent many hours sorting through numerous past generations.

After the death of her husband in December of 2008, Donna continued to live at their family home in Wiota. However her eyesight continuously worsened which prompted her to move to Nemont Manor in Glasgow in October of 2010. She relocated to Prairie Ridge in 2018 where she continued to live until her death early Sunday morning, Oct. 30, 2022, in Glasgow.

Donna was preceded in death by her husband, Jed; her parents; brother, Gordon Leraas and sister, Thelma Bjorklund.

Mom loved people and was a great friend. She was proud of her life and was the glue that kept us all together. We will treasure our memories of her and forever miss her.

Funeral services will be held 1 p.m., Friday, Nov. 4, 2022, at Our Redeemer Lutheran Church in Nashua. She will be laid to rest beside her husband in the Nashua Cemetery. Condolences may be left for the family at bellmortuarymontana.com.

Memorials can be made to the organization of your choice or to one of Donna's favorites: Nashua All-School Reunion, Our Redeemer Lutheran Church or the Historical Society of the Pioneer Museum.